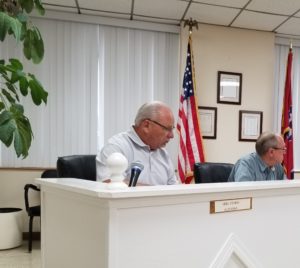 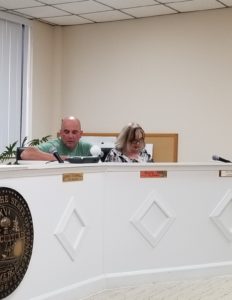 At the Town of Jacksboro regular monthly meeting are Shayne Green (L)  and Jerri Starrett (R).

Last night, Jerri Starrett and Gene Stevens were sworn in as aldermen for the Town of Jacksboro.Their first meeting was accomplished in less than 10 minutes. Aldermen JC Miller was appointed as vice mayor and appointed to the planning commission. Mayor June Forstner pointed out that Miller has served as mayor twice previously and was very well qualified for the positions.

Yearly, the town makes a financial contribution to the Jacksboro Cemetery. The board agreed to release this year’s $1,500 contribution.

Miller praised the fire department for how well they handled a recent apartment fire, saying “they did a fantastic job”. Jason Paulauska was hired as a full-time fireman, he was previously working as an auxiliary fireman.