The atmosphere was upbeat as country music blared from the speakers.  The pace was quick.  And players and coaches were soaking up the opening day of spring football practice like a first day of vacation. 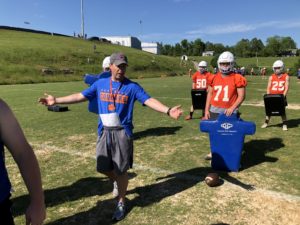 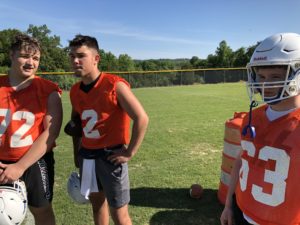 Hunter White, Number 2, is competing for a starting spot at quarterback with Joseph Paul.  Cougars 72 – Joseph Snodderly (L) and
63 – Isaac Selvy look on with White.

The wait to watch some Cougar football is over, and you only had to look as far as the face of Campbell County  Cougar Head Football Coach Justin Price to know it. 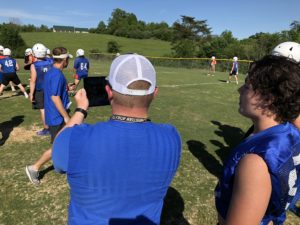 Coach Chris Honeycutt, a former Cougar, shows Chase Carroll (R) how to frame his filming from tackle to tackle

The ninth-year head coach said to WLAF, “Today’s focus was learning to practice. We wanted our players to understand the structure and familiarize themselves with the scheme and techniques. We will have the same focus tomorrow (Tuesday). We want to build depth and confidence through out spring.”

Here are dates to remember:

Thursday, May 16, is a scrimmage against Sevier County at CC that starts at 6 pm.

Tuesday, May 21, is a practice scrimmage against Gatlinburg Pittman at Carson Newman’s Burke-Tarr Stadium.  It starts at approximately 5:30 pm. 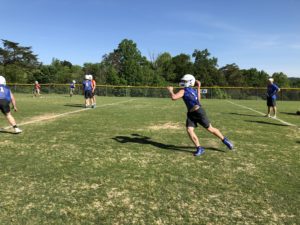 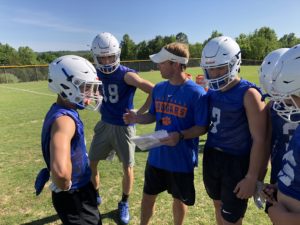 CCHS opens the season at home on August 23 with Cocke County out of Newport followed by a road game at Straw Plains against Carter on August 30.

WLAF and the B & M Tires Sports Network will again bring you all the live radio and televised coverage of every CCHS game in the new year.  In 2019, it marks the 45th year of live coverage of Campbell Football on WLAF.  (WLAF NEWS PUBLISHED – 05/07/2019-6AM)