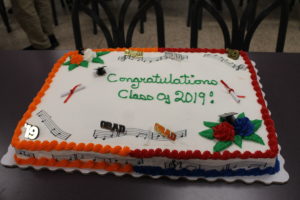 “This is a very special graduating band class at Campbell County High School,” said CCHS Band Director Adam Wright.  So special that the fifth year band director held a signing day; a first for the band. 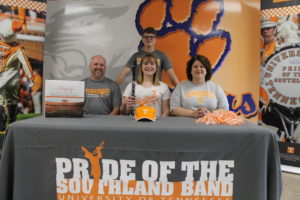 Emily Ayers, who has perfect pitch, is UT bound.  Wright said, “She’s a pianist first then a clarinet player not to mention a singer.”  Ayers tallied a perfect score in the English portion of her ACT test and also served as the band’s co-drum major for two years.  Wright adds that she has a “do whatever you need her to do” attitude.  She plans to major in Music Education. 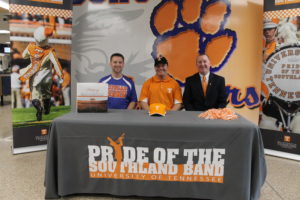 Roger Chavis started on the trumpet in middle school but found his calling at tuba two and a half years ago.  That makes his scholarship to play tuba in the Pride of the Southland Band at UT that much more impressive.  Wright calls his work ethic as “incredible” and glows when he says that Chavis scored a 30 on his ACT.  Chavis plans to major in Music Education. 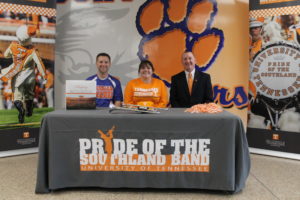 Tiffany Hopson has said to Wright that since she was in 8th grade that all the lover of the trumpet wants is to be a band director.  “Hopson is a helper.  It doesn’t matter if it’s a sixth grader or a senior needing help, she’s helping them,” said Wright.  She served as co-drum major her junior and senior years. 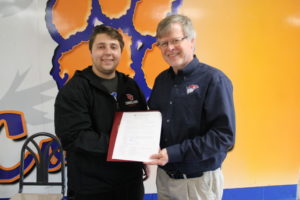 Caleb King is on his way to Cumberlands on what Wright describes as a “nice scholarship” which is mostly a music scholarship.  “Caleb, who transferred here in middle school, started in music earlier than most students,” said Wright.  He started on the clarinet with the mind set to play about any instrument, and does, but his heart is set on the trumpet Wright says. 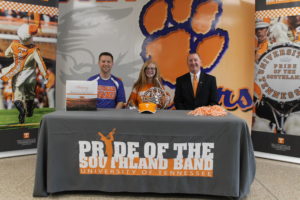 Emily Leopin, who plans to attend UT and major in French Horn performance, is a phenomenal student according to Wright.  He said, “Emily is graduating early after working very hard at music since 8th grade.  She befriended those older band members who love music and really took off.”  Wright makes special notice of Leopin’s work ethic saying it’s very obvious that she puts in two to three hours of practice every day. 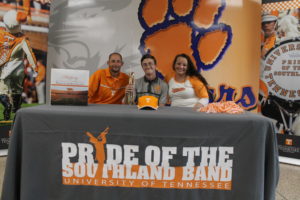 Austin Siler plans to major in Engineering at UT said Wright.  He points out that Siler, on paper, is one of the smartest, if not the smartest student coming out of this CCHS senior class.  His 31 on the ACT speaks volumes.  Wright said, “Austin has in incredible work ethic; always arriving early and volunteering to do anything from taking out the trash to whatever needs to be done at the moment.”  He plays the trumpet.

Jordan Browning has accepted a scholarship to Coastal Carolina since signing day.  “She has evolved into quite a leader after starting out as one of the shyest students I have ever had,” said Wright.  Browning has worked her way up in music and will play the flute in the CCU marching band.

Bittersweet.  That’s how Wright describes Signing Day.  He said, “I’m excited about seeing what’s next for them, because my job is to get them ready of for the next level. We want them to become the greatest people they can become displaying a great work ethic preparing them to face whatever life throws at them.”  Band gives opportunities and friendships that last a lifetime.

Even though Wright is losing 19 seniors, more Austin’s and Tiffany’s are on the way.  As of Wednesday, more than 100 students have signed up for band for next school year.  (WLAF NEWS PUBLISHED – 05/09/2019-6AM-PHOTOS COURTESY OF DAVID GRAHAM)

One Reply to “Signing Day is memorable for CCHS band members”