This award is given to the top male and female athlete at Bryan College. The recipients are chosen by the Department of Athletics staff. Consideration is given to those student-athletes who not only excel in their respective sport, but more importantly, model the character qualities of Christ on and off the field of play; who remain steadfast and loyal to the success of the team—an encourager of others, selfless, dedicated to the task of building-up people and strengthening relationships; and who possess an unwavering commitment to “fight the good fight” of faith with the tenacity, might, and valor of the Lion of Judah.

Cain, the male recipient of the Lion of Valor, is an outfielder for Bryan baseball and comes to Dayton from Jacksboro, Tennessee.  He’s one of four members from the Cain family to call Bryan home. Older brother John Cain is a ’15 graduate and former pitcher for the Lions, sister Sarah Cain (SO/Jacksboro, Tenn.) is wrapping up her sophomore year on the women’s basketball team, and sister Anna Cain will be making her way to campus this fall as a freshman on the volleyball team. Tucker will be graduating next month with a Bachelor’s of Science degree in Christian Ministry with an emphasis in youth ministry. The Christian Ministry program at Bryan is rooted in a blend of strong biblical and theological emphasis, spiritual formation of the individual, and knowledge of time-tested and contemporary ministry principles. 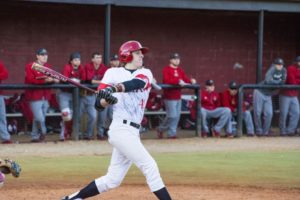 Cain was Bryan’s lone representative to the Appalachian Athletic Conference All-Tournament Team after hitting .300 with five RBIs, one double, a pair of runs scored, and three walks through their three games played. (PHOTO COURTESY OF THE HERALD-NEWS)

While Cain and the Lions are currently working on an impressive 2019 campaign, Bryan baseball is following up an outstanding 2018 season that saw a trio of Lions earn AAC Coach of the Year, AAC Player of the Year, and AAC Pitcher & Newcomer of the Year while producing the program’s most successful regular-season in history. The Lions fought for a remarkable 38-13 overall record and 21-6 mark in conference play en route to capturing their first-ever AAC regular-season championship. Bryan also battled their way to a No. 9 ranking in the final NAIA Coaches’ Top-25 poll, which was the highest the Lions had ever seen. Bryan performed as a true NAIA powerhouse, eliminating the No. 2 seed and host team before falling on day two of the 2018 Baseball National Championship Opening Round—Williamsburg Bracket. At the conclusion of the season, the Lions posted a 41-17 overall record, which tied the team for the second most wins in a season in program history.

Here in 2019, despite one of the more challenging schedules in the NAIA, 23rd-ranked Bryan baseball currently stands at 36-15.  Cain and his Lions are headed to the NAIA National Championship at Miami Gardens, Florida.  On Monday, Bryan faces the Williams Jessup Warriors of California on Paul Demie Mainieri Field.

Cain has been a vital part of the team’s success, serving as a constant leader both on and off the ballfield. He’s also been an exemplary student in the classroom, garnering Daktronics-NAIA Scholar-Athlete honors last season and being named a two-time All-Academic honoree. Last year he was also baseball’s lone representative to the AAC Champions of Character Team, which is comprised of student-athletes who best represent the five core values of the NAIA Champions of Character Program: respect, integrity, responsibility, servant leadership, and sportsmanship.

Head baseball Coach, Clint McAuley had this to say about Cain, “Tucker Cain is the type of ballplayer that changes the culture of a team. His attitude, leadership, and overall character have made an incredible impact on his teammates and coaches during his time here. This year he was voted a team captain by his teammates, and no matter what his role is on the team, he is a constant source of energy, positivity, and leadership. One of the most likeable guys we have ever had, he is always a pleasure to be around and will be deeply missed next year.”

In addition to excelling in the classroom and earning her second consecutive Daktronics-NAIA Scholar-Athlete and All-Academic honors this season, she played a key role in helping her teammates leave their mark in the history books coming off the winningest season in program history, three-peating as Appalachian Athletic Conference tournament champions, winning back-to-back conference regular-season titles, making their fourth straight appearance in the national tournament, and climbing to a No. 12 ranking in the final NAIA Div. II Women’s Basketball Coaches’ Top-25 Poll. The extraordinary 2018-19 season included an undefeated 26-0 record in conference play during the regular-season before notching three more wins in the AAC tournament for a 29-0 record against conference foes while finishing at 31-2 overall. During the year, Bryan pieced together a record-breaking 30-game winning streak that was eventually snapped in opening round play of the NAIA Div. II Women’s Basketball National Championship.

Allison and the Lions were guided by this year’s AAC Coach of the Year, Jason Smith, as he led with a “We Over Me” mentality that Allison and the team fully bought into, which resulted in unprecedented success. While Bryan competed selflessly and rarely received individual honors, Allison was still recognized for her commanding defensive presence on the hardwood when named this year’s Defensive Player of the Year by the AAC, marking the first time since the 2013-14 season that a Lion had received the distinction for standout defensive prowess. She was the lone Bryan player to land on both the All-AAC Second Team and All-Defensive Team this year. In Honors Chapel, Allison was also given the Senior Communication Studies Scholarship Award, presented by the Department of Communication, Media, & Culture.

“To’Nesha has “fought the good fight with tenacity” that accurately represents this award,” stated Coach Smith. “She has been a leader on and off the court in many different disciplines positively impacting the Bryan College campus and students. Her Christ-like servant hood has left an everlasting legacy that will impact lives for years to come. She will always be loved and missed!” (WLAF NEWS PUBLISHED – 05/10/2019-6AM-PHOTO AND STORY COURTESY OF BRYAN COLLEGE ATHLETICS)