It was only fitting.  Mary Brumitte and her three children were handed the keys to their new home on Friday afternoon just as Mother’s Day weekend was beginning.  The first step toward their new Habitat for Humanity Home was taken by Mary in December 2017.

However, once ground was broken last October, the pace quickened.

“It happened fast,” Steve McCormick, Habitat’s executive director said, as he called the new home at 614 East Fir Street “gorgeous.”  “It’s solid, feels nice and is inviting.”  Finishing touches were made right up until Friday’s 5 pm ribbon cutting attended by more than 60 people.

She and her children will move in this week.  She said she didn’t think having this new home was possible and encouraged others to apply. 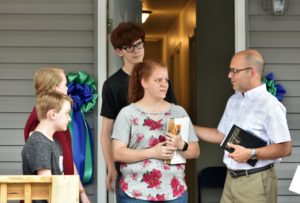 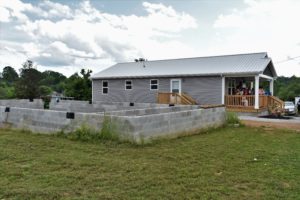 “A lot of people think they don’t qualify, but they do,” said McCormick who adds that Habitat is looking for a partnering family for the home next to the Brumitte’s.

McCormick added that they had lots of volunteers who worked hard not to mention the Brumitte family’s contribution.  He noted that generally a family will put in about 300 sweat equity hours, but the Brumitte’s put in more than 1,200 hours.