On Tuesday night, the Campbell County Middle School Cougars Baseball team brought home the barrel in the inaugural “Battle for the Barrel” Baseball Tournament that also serves as the team’s end-of-season tournament.    The Cougars went toe-to-toe with an outstanding and gritty Cumberland Gap team winning 4-3 in a 7 inning marathon with a walk-off single by Davin Welch, bringing Eli Austin in to score. That’s after Mason Shanks made it home on a passed ball by the catcher to tie the game. Shanks helped himself to earn the win by throwing a complete 7 inning game on 133 pitches striking out nine Panthers while holding CG to 6 hits with only two earned runs.

TOP PHOTO:  Some of the Cougars team members 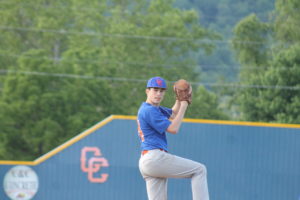 Mason Shanks on the mound

The game, played on Brown-Archer Field, was a true team effort with all the varsity players combining for 9 for 24 with a combined .375 batting average, a .458 slugging percentage as a team and a .558 on base percentage.  It all came on five walks and three hit batters. 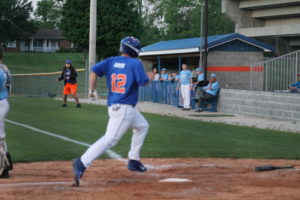 The championship game was the culmination of a tournament that saw CCMS beat Bell County (Kentucky) 10-4 and a subsequent forfeit by Lee County (Virginia). The “Battle for the Barrel” championship win left CCMS the 2019 undefeated champions.  (WLAF NEWS PUBLISHED – 05/15/2019-6AM-PHOTOS COURTESY OF JASON AUSTIN)