The Drug Unit and Special Response Team of the La Follette Police Department made a house call just before 7 am on Thursday morning in downtown La Follette.

Officers interviewed one suspect in apartment 207 at the apartments* at the corner of East Central and North Tennessee Avenues, and they also encountered another person while on scene.  LPD Captain Stephen Wallen explains that a search warrant was executed coming on the heels of undercover drug buys at this particular apartment.  Wallen said, ” Meth and Opana had been bought from a female tenant identified as 48-year old Deborah Allen.”  According to jail records, Allen has a prior arrest record. 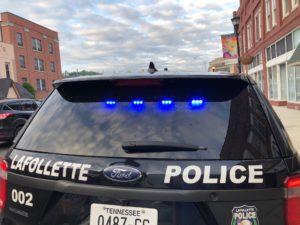 Multiple cruisers, marked and unmarked, along with several officers were on the scene

Wallen said, “Allen’s case will be presented to the Campbell County Grand Jury on sell and delivery charges.”  A man who has been arrested before, Michael Sloman, age 50, was arrested this morning on a second violation of probation warrant.