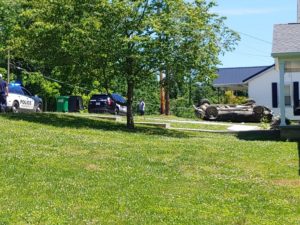 La FOLLETTE, TN.  (WLAF) – A car, going a little too fast, according to authorities, ended up on its top just after 2:30 pm this afternoon.    Reports coming in to WLAF are that the driver of the car came out of a curve on South 23rd Street in La Follette, hit a ditch, and flipped on its top landing between two utility poles and two houses.  Witnesses say the driver was able to squeeze out of the wreckage and received only minor injuries.