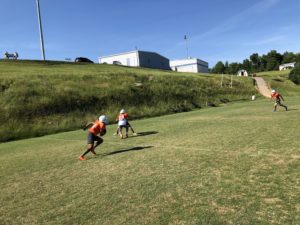 Jacksboro, TN  (WLAF) – Coach Justin Price could not hold his excitement at Monday’s spring football practice session.  He is fired up, and so is his Campbell High team, to play this afternoon at Carson-Newman’s Burke-Tarr Stadium.  CCHS takes on the Gatlinburg-Pittman Highlanders in a 5:30 pm practice/scrimmage.

TOP PHOTOS:  At Monday’s spring practice, Cougar quarterback Joseph Paul is about to catch the snap from center Brennen Byrge.  Devlin Dukes is on the receiving end of the pass on the same play that Paul threw his way.

Price points out that, except for the different color jerseys, you’ll think you’re at a Cougar practice session if you attend this evening’s practice/scrimmage.

Campbell and Pittman will split into platoons scattered around C-N’s Field Turf surface.  Price says there will be some 7 on 7, third down situations and red zone drills.  “We’ll do inside drills with our interior guys, mainly running plays, and then we’ll have some open field time,” said the 9th year head coach.  Each team will run at least 10 plays to get in some reps.

Thursday, May 23, is the Blue and Orange game at Dossett Stadium starting at 1:30 pm.

Here is the 2019 CCHS Football Schedule:

CCHS opens the regular season at home on August 23 with Cocke County out of Newport followed by a road game at Straw Plains against Carter on August 30.

WLAF and the B & M Tires Sports Network will again bring you all the live radio and televised coverage of every CCHS game in the new year.  In 2019, it marks the 45th year of live coverage of Campbell Football on WLAF.  Les Martin returns for his ninth season calling the Cougars along with his broadcast partner Brent Allen.  (WLAF NEWS PUBLISHED – 05/21/2019-6AM)