WLAF celebrates 66 years on the air today, and it just wouldn’t be much of a celebration without the station’s Bright Good Morning Voice, Big Josh Etter.  Of those 66 years, Big Josh has been the lead voice for almost 15 of them.

Musician Mary Alice Lovelace said, “That’s neat!”  Penny Etter, Big Josh’s daughter, was thrilled for him and said, “He’s always had the gift of gab.  I’m so excited for him to receive this award.” 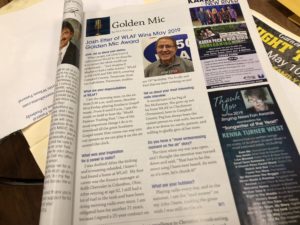 “I never gave it (winning) much thought and didn’t think it would happen to me.   I thought it only happened at bigger stations,” said Big Josh.  He grinned when saying he was honored, and that it was something no one can ever take away.  “It’s really neat that I was chosen in the 50th year of The Singing News,” said Big Josh. 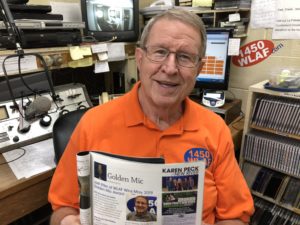 So it’s only fitting that on this May 17, WLAF celebrates not only its 66th anniversary but its Bright Good Morning Voice, Big Josh Etter and his Golden Mic.  (WLAF NEWS PUBLISHED – 05/17/2019-6AM)