LaFollette native, General Carl W. Stiner, along with fifteen other paratroopers, was inducted into the 82nd Airborne Division Hall of Fame at Fort Bragg, North Carolina, last Wednesday.  21 friends and family made the trip to Fort Bragg for the special day. 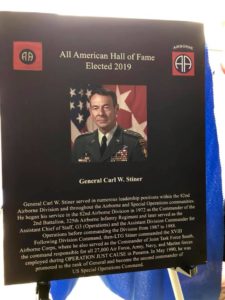 Inscription on the Plaque

General Carl W. Stiner served in numerous leadership positions within the 82nd Airborne Division and throughout the Airborne and Special Operations communities.  He began his service in the 82nd Airborne Division in 1972 as the Commander of the 2nd Battalion, 325th Airborne Infantry Regiment and later served as the Assistant Chief of Staff, G3 (Operations) and the Assistant Division Commander for Operations before commanding the Division from 1987 to 188.  Following Division Command, then Lieutenant General Stiner commanded the XVIII Airborne Corps, where he served as the Commander of Joint Task Force South, the command responsible for all 27,000 Air Force, Army, Navy, and Marine forces employed during OPERATION JUST CAUSE in Panama.  In May 1990, he was promoted to the rank of General and became the second commander of the US Special Operation Command. 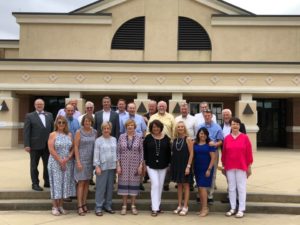 Friends and family attended Stiner’s induction and are pictured here