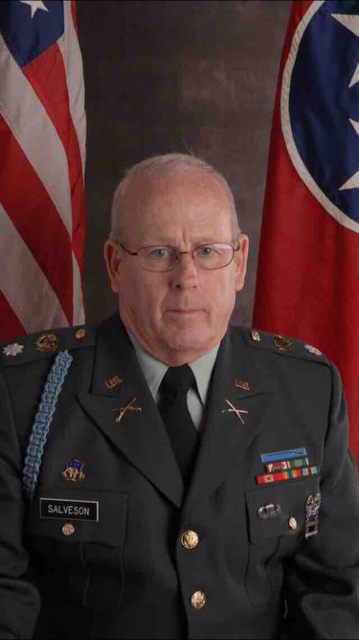 Retired Lieutenant Colonel {LTC (r)} Salveson was born in Munich, Germany while his parents were stationed with the U. S. Army in Germany in 1950. He lived with his parents in various states and European countries until he graduated from college. This included attending a Dutch kindergarten and living four years in The Hague, Holland. He graduated from Eastwood High School in El Paso Texas and earned a Bachelor of Science degree in Mathematics (minor in Engineering) from the University of Texas at El Paso in 1972. He earned a Master of Science Degree in Industrial Education and Engineering Technology from West Texas State University (now West Texas State A & M University) in 1985.

LTC (r) Salveson was commissioned as a 2nd Lieutenant in December, 1972, and entered the U. S. Army in 1973 at Fort Bliss Texas as an Air Defense Artillery (ADA) officer. He attended the ADA Officer Basic Training Course, Chaparral Vulcan Officers Course and Redeye Missile Officers course at Fort Bliss Texas, as well as Airborne School at Fort Benning Georgia, before being assigned to the 1st Battalion, 16th Infantry, of the 1st Infantry Division in Germany. He branch transferred to the Infantry branch in 1975.

LTC (r) Salveson is also a licensed Pyrotechnic Technician in Tennessee. As such he fired numerous fireworks shows for Pyro Shows of LaFollette in the southeastern United States as well as the Nation’s 4th of July Fireworks show in Washington, DC in 2008 and 2009.

Currently, LTC Salveson works as a substitute teacher in Campbell/Anderson Counties, a county sport team bus driver, a fireworks shooter/truck driver for Pyro Shows of LaFollette, a flagman for the LaFollette Electric Company, and a tour bus driver for Premier Transportation of Knoxville. (WLAF NEWS PUBLISHED – 05/24/2019-6AM)