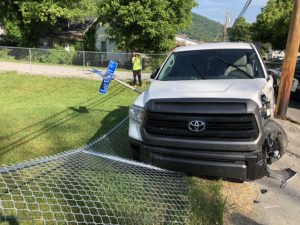 LAFOLLETTE, TN  (WLAF) – A pick-up truck hit a power pole and laid down a fence and street sign just after 9 am Friday morning.  At the corner of South Indiana Avenue and East Chestnut Street is where witnesses say a woman driver veered off South Indiana.  One witness said that the woman hit the pole, flagged down a passing pick-up truck, threw her items in that truck and was driven away leaving the scene.  Within minutes, the truck that drove away with the woman returned to the scene.  That driver said the woman asked him to take her to her “old man” out near the Long Hollow Baptist Church, and he did. 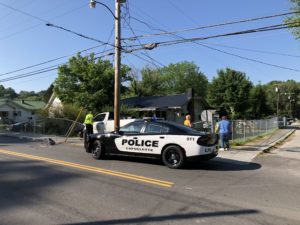 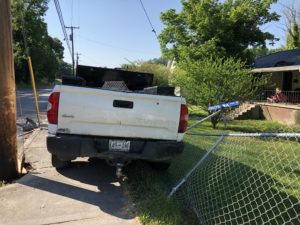 La Follette Police Officers are working the accident where no one was injured.  However, neighbors say that youngsters were playing in the yard just before the wreck happened..  (WLAF NEWS PUBLISHED – 05/24/2019-10AM)