STONY FORK, TN  (WLAF) – Tragedy struck in the Windrock Park area of Stony Fork early on Sunday afternoon.  Campbell County Sheriff Robbie Goins said three people were pronounced dead at the scene of an ATV wreck.  It was carrying a family of four that left a trail and traveled down a steep embankment.

One of the four was airlifted by a med chopper to a Knoxville hospital.  His injuries were described as serious. 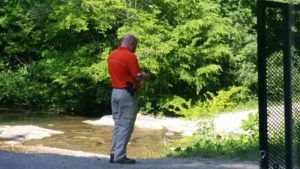 Officials confirmed the victims killed were 47-year-old Ronnie Akins, 19-year-old Dillon Akins and 19-year-old Jonathan Laws. All four are from North Carolina and were here for the holiday weekend as guests of Windrock.

One official details that the ATV traveled some 200 feet down the embankment to a creek.  It took the better part of two hours to rescue the injured person and get him to the helicopter in what is being described as a very dangerous rescue and recovery.