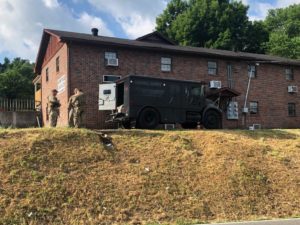 The Campbell County Sheriff’s Special Weapons and Tactics Team along with Jacksboro Police executed a narcotics search warrant just after 9 am this morning. The home of Mercedes Taylor at 119 Island Ford Road, Apartment 101, (top photo) is where officers knocked on the door.According to investigators, the day’s activities began weeks ago when the Campbell County Sheriff’s Narcotics Investigators conducted several controlled buys at the Jacksboro home. Over a period of time, officers say, these buys consisted of methamphetamine (ICE).

While executing the warrant this morning, investigators found a substance believed to be methamphetamine or ICE. Drug paraphernalia and evidence to facilitate the sale of narcotics were also discovered, according to CCSO reports. 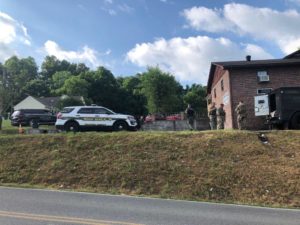 Taylor was arrested on site for a prior warrant and is facing charges of the sale and delivery of methamphetamine, a schedule II drug, in a school zone.
Due to evidence of small children living at Taylor’s home a Department of Children Services referral has been initiated.