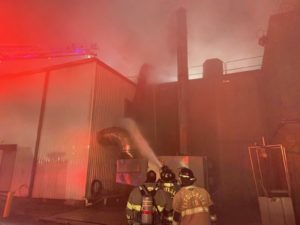 CARYVILLE, TN  (WLAF) – Firefighters from three agencies responded in support of the Caryville Fire Department late Wednesday night to fight a fire at Campos Foods on Elkins Road.  Jacksboro and La Follette Fire Departments along with the Campbell County Rural Fire Service helped the CFD contain a fire to the exhaust chimney for the ovens and a portion of the roof at Campos Foods, according to CCRFS Assistant Chief Daniel Lawson.

Lawson said, “The biggest challenge was to contain the fire and keep it out of the rest of the building.  And we were able to do that.”  He adds that a hole had to be cut in the exhaust vent in order to get up top to extinguish the fire and limit the fire that caught the roof on fire.  Lawson describes that there was quite a bit of damage to the exhaust.  He credits La Follette’s ladder unit (TOP PHOTO) as being a difference maker in getting onto the roof to battle the fire.

The call came in at 11:08 pm Wednesday night and crews did not clear the scene until after 1 am on Thursday.  There were no injuries. 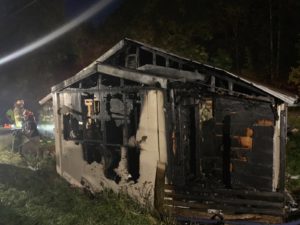 Firefighters with the CCRFS and the LFD had just finished up working a house fire on Cave Springs Road.  Units were on scene there in under three minutes and contained the blaze within ten minutes.  (WLAF NEWS PUBLISHED – 06/06/2019-6AM-PHOTOS COURTESY OF CCRFS ASSISTANT CHIEF DANIEL LAWSON AND CFD CHIEF EDDIE HATMKER)