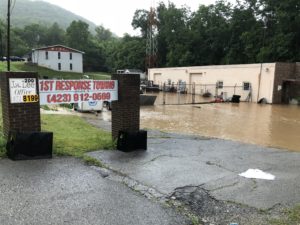 LAFOLLETTE, TN  (WLAF) – La Follette Utilities Board General Manager said, “We’re doing all we can do.”     As of the moment, some 3,500 LUB customers are without power.  Most of that total centers around downtown La Follette and parts of Demory and Grantsboro.

TOP PHOTOS:  The scene on North 5th Street at 8 pm.

Baird said a huge tree took down a double-circuit on South Tennessee Avenue taking out La Follette’s power and shutting down South Tennessee Avenue just south of Linden Park.  Baird described that as “big trouble.”  He said, “The tree is out of LUB’s right of way and was not trimmed or cut down as a result.”  Baird adds that a pole was broken in the process, and that crews cannot begin the process of replacing the pole and restoring power until the rain stops.

Aside from that dilemma, power is out at the LUB Water Plant.  That’s creating some water outages and is leaving much of Demory and Grantsboro without electricity.

Given the flooding and continuing rain, the closed streets and roads, people being stranded and rescued, the power outage is taking a back seat.  (WLAF NEWS PUBLISHED – 06/07/2019-10PM)