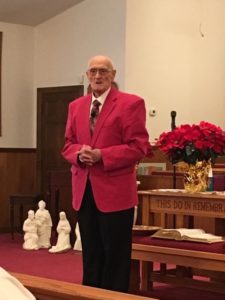 LAFOLLETT (HIGH KNOB), TN  (WLAF) – He was the baseball coach whose team won about all the games.  Those are the thoughts of a then 12-year old kid about the Reverend Paul Hembree (ABOVE) .   Those thoughts come from a 50-years ago summer when Hembree’s “The Quickie” Restaurant team ran rough shod over the rest of the La Follette Little League.  From that summer forward, I never really knew Preacher Paul, but I always held him in high esteem, because of how good he was at leading people whether it was on the baseball diamond or from the pulpit at High Knob Baptist Church.

Paul Hembree passed away on Sunday morning at his Pleasant Ridge home.  He’d had some ailments the past couple of months, but many folks, me included, thought he’d battle past them, but he was unable.

One of his sons, Roger, noted that he preached his last sermon on Sunday, May 26, a day he wasn’t supposed to be out of the house, because he was recovering from bronchitis .  That morning, he called Roger’s wife Kim and said, “I’m going to church.  Come get me.”  To everyone’s surprise, he came to preach not just attend, and preach he did.

Preacher Paul, knowing his life was only going to last a few more weeks, sent word to his flock that he’d let them down, and that he needed to resign, because he was not the pastor they needed.  And that they needed to start the process of finding a new pastor.  Although the church would not hear of that, but that was the kind of pastor he was. 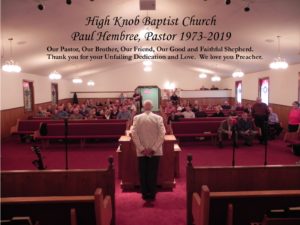 “He was such a good person.  Everybody loved Preacher Hembree,” said La Follette Mayor Mike Stanfield.  This week, the City’s flags are flying at half-staff in honor of the man who served High Knob Baptist Church for nearly 50 years.

Paul prayed last week that his funeral home friends and fellow ministers feelings would not be hurt with his choices.  Roger told him he was overthinking this.  Pastor Paul decided on Cross-Smith Funeral Home and then Rev. Bill Braden to preach his funeral and Brother Phil Rutherford to speak.  Braden and Rutherford spoke at Kathleen’s (Paul’s wife) funeral in 1994.

Perhaps it was only fitting that the 85-year old preacher left for his heavenly home on the Sabbath, his regular work day.  Chalk up one more victory for the long ago baseball coach.  (WLAF NEWS PUBLISHED – 06/09/2019-6AM-PHOTOS COURTESY OF THE HEMBREE FAMILY)