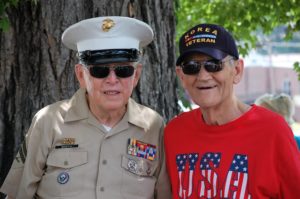 JACKSBORO, TN  (WLAF) – This is an updated feature from Memorial Day 2019.

We rub shoulders with them every day.  And most times, we don’t have the first clue that a hero just walked by.  You would never think that the smiling and easy going Hobert McCreary was a heavy weapons operator sitting in the back of a jeep firing at the enemy in the Korean War.  But as an 18-year -old, he was and suffered permanent hearing loss as a result.  “I always wanted to be a soldier,” said McCreary.

The now the 82-year- old minister offers no hesitation when asked about his time in the US Army.  “I enlisted, because I’d always wanted to be a soldier.  My first assignment was Fort Jackson-South Carolina, then Fort Carson-Colorado and Korea,” said McCreary.

For nearly three years in the 1950s, La Follette resident US Army Specialist E-3 McCreary fought in the Korean War.  He said, “They sent us on home after the war was over.” 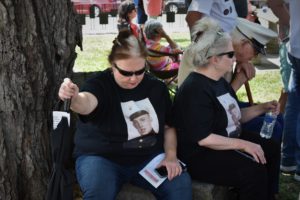 The Bostic sisters, Mitzi (left) and Kim, wear shirts showcasing the face of their father Poe.  He was a Marine who fought in the Korean War and also attended Monday’s Memorial Day ceremony.

McCreary spoke on WLAF’s Morning Devotion program on Memorial Day morning.  He made mention of Memorial Day and then sang what he called one of his favorite songs, ‘America.’  “This morning, it’s an honor to be able to stand up for our country and to stand up for the Lord and Savior, Jesus Christ.  I wasn’t saved when I went to Korea, but after I was saved, I went on a different battlefield to fight for our Lord,” McCreary preached.  Once he delivered his message, he then drove straight to the courthouse for the Memorial Day celebration.

WLAF’s Charlie and Lindsey Hutson shadowed McCreary as he walked the monument grounds of the courthouse at Jacksboro on Monday morning.  See their more than 100 photos HERE from the Memorial Day ceremony. 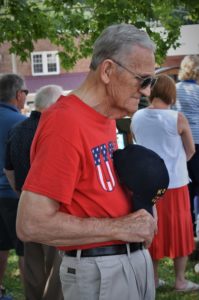 McCreary smiled when he said  he attends such ceremonies when he can and that he loves to hear what other veterans have done.  “I’m trying to honor those who have gone on.  Those are the real heroes,” he said.  (WLAF NEWS PUBLISHED 05/28/2019-6AM-PHOTOS COURTESY OF WLAF’S CHARLIE HUTSON AND LINDSEY HUTSON)