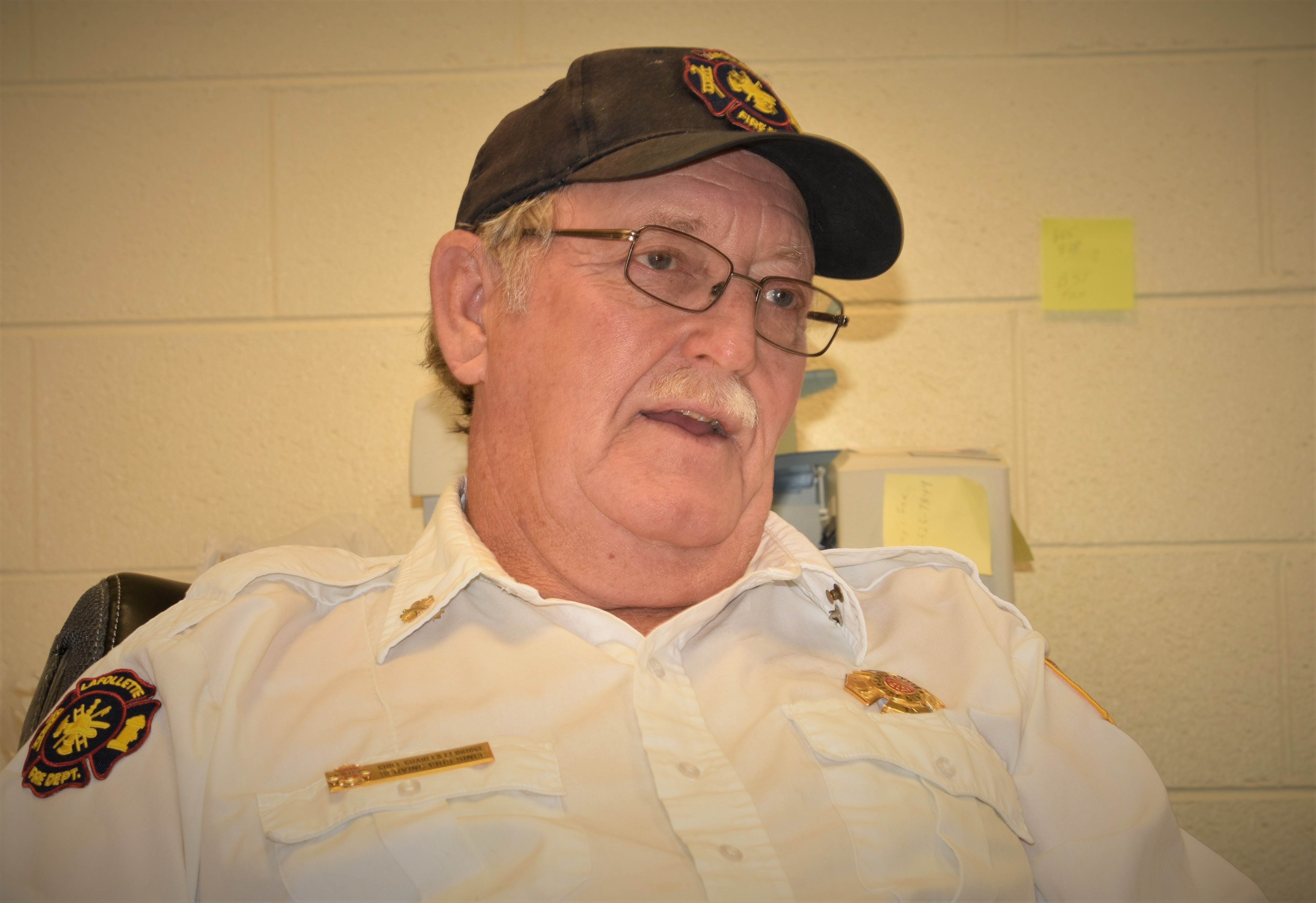 LAFOLLETTE, TN (WLAF) – Wednesday’s surprise luncheon for retiring La Follette Fire Chief Charles Eldridge actually ended up being a surprise.  La Follette City Administrator Jimmy Jeffries knew, because he said, “The chief hasn’t fussed about it yet which means he doesn’t know.  He wouldn’t like it if he knew we were going to make a big deal over his retirement.”

“The chief is the hardest working person around.  He was complaining yesterday because he didn’t have enough to do.  And here he is in his last week before retiring,” Jeffries said.  That thought prompted Jeffries to recall a time when C-E had to be put in the hospital.   “When the hospital released him, he came back to work that same day,” he said. 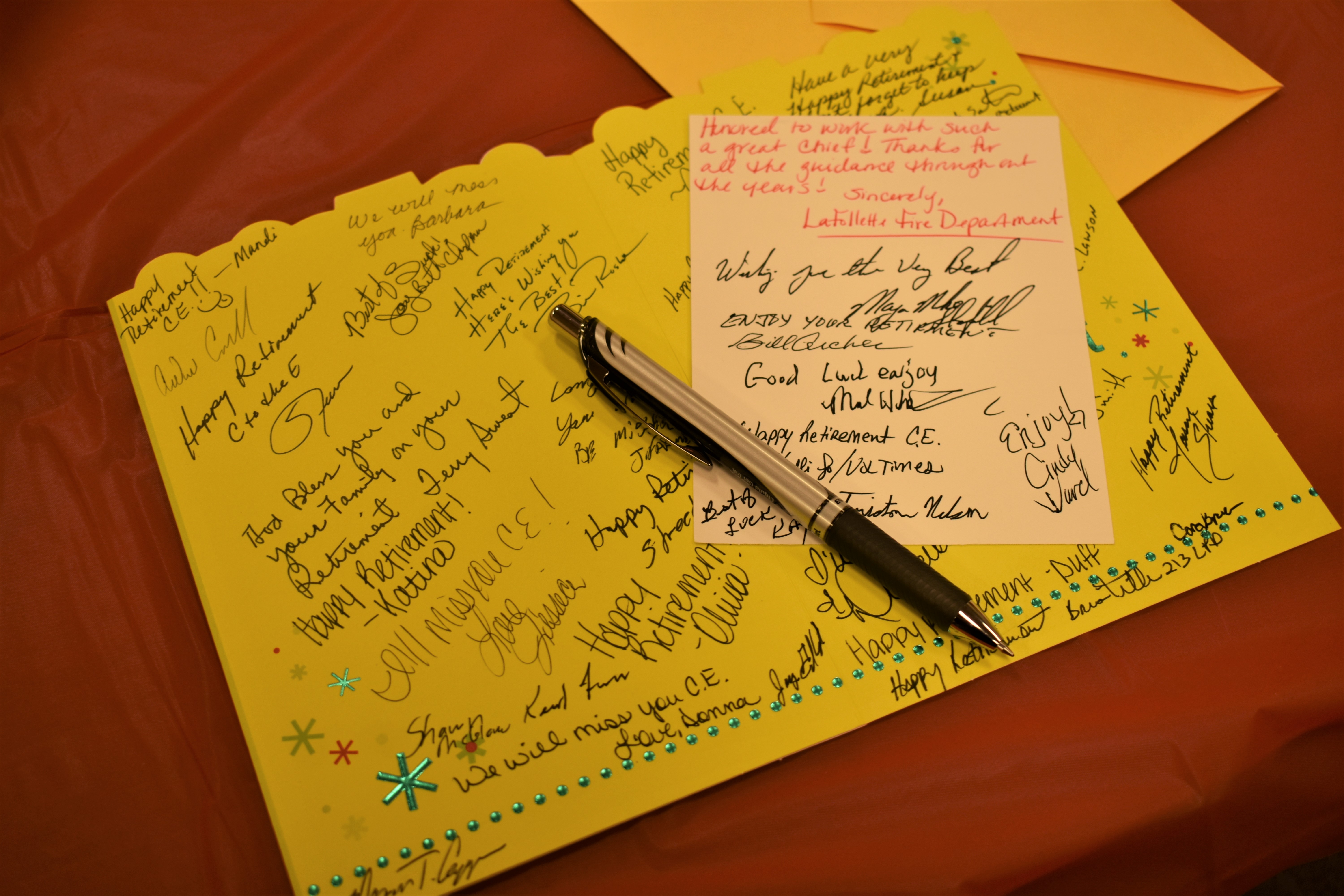 An extra card was needed to make room for all of the well wishes to retiring Fire Chief Charles Eldridge.

“Thank goodness he’s gone,” said La Follette Mayor Mike Stanfield with a hearty laugh.  The mayor said Charles has always been a friend.  “His skills and talents in construction helped spearhead two fire halls and the expansion of city hall.  C-E has done a lot for the city,” Stanfield said. 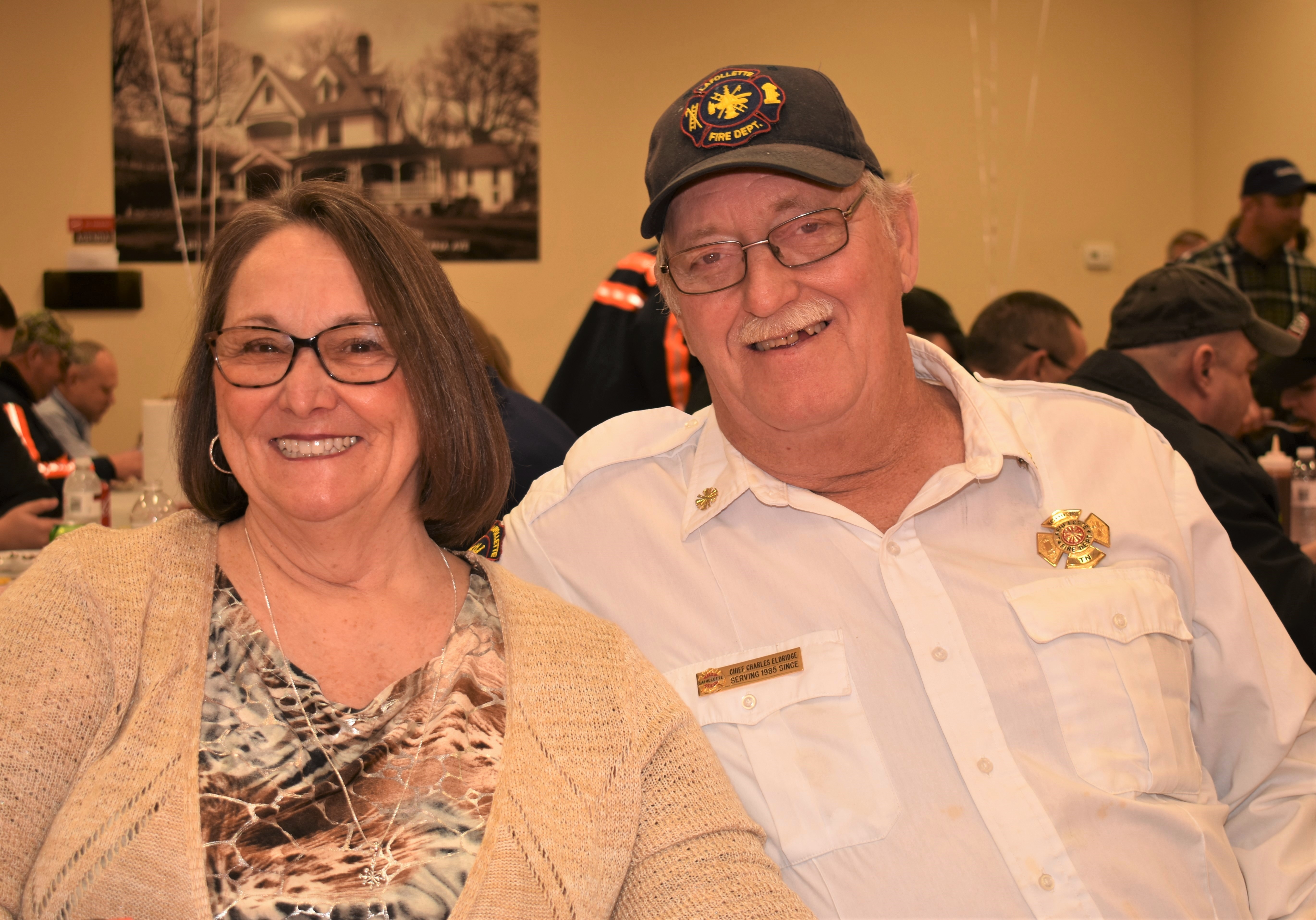 Candria Eldridge (left) knows the chief best.  She’s been married to him for 47 years.  It’s a marriage that started with the young teenagers eloping to Georgia to tie the knot.  “He goes at everything 110 percent, and that includes when it comes to taking care of his daughters; Elria and Ashley, too,” said Mrs. Eldridge.

“I was a member of the council that hired Charles back in the 1980s.  In fact, he was a part of a staffing expansion of eight to 10 firemen,” said Council Member Bill Archer.  Ironically, after a hiatus from public office, Archer is back on council as Eldridge retires. 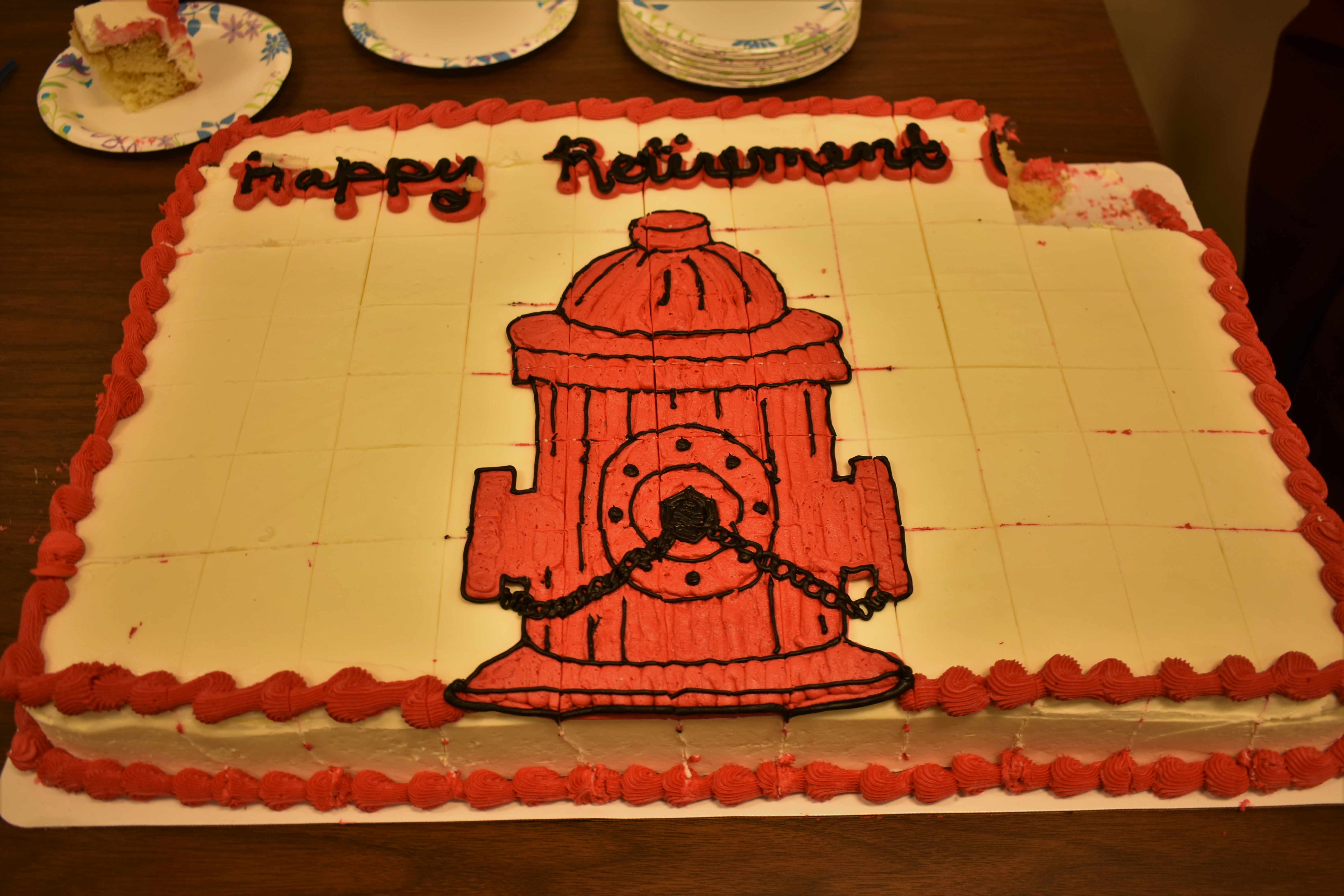 Former firefighter and current La Follette City Council Member Lonnie “Hot Rod” Wilson was moving on from the LFD about the time Eldridge began his 34 year LFD career.  Despite the fact the the two never worked together, they became really good friends over the years.  Wilson said, “With the support of council, Charles has brought the fire department up to the 21st century, and he’s gone at it with a passion.” 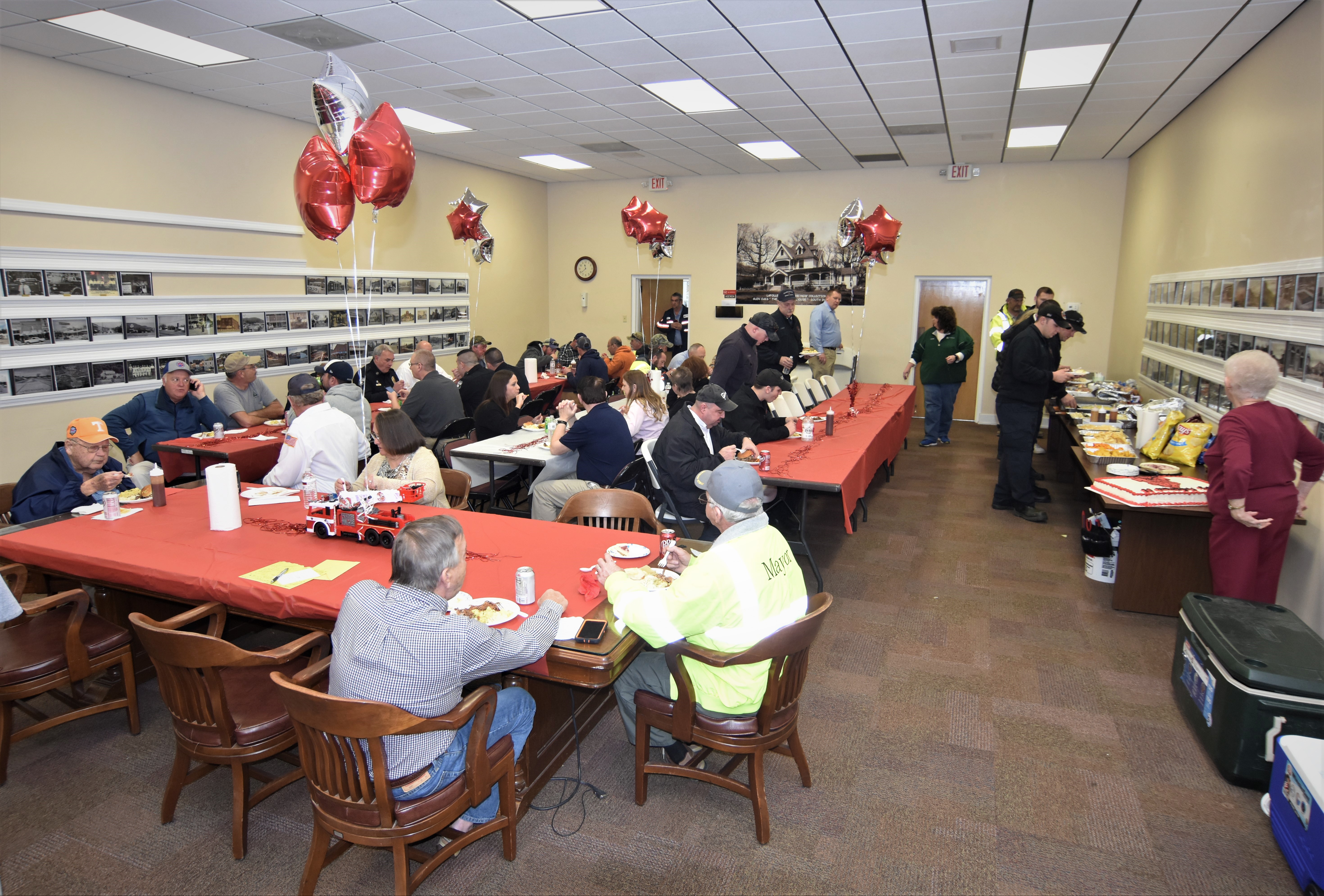 Gary Byrd served as Fire Chief for La Follette for 15 years and is the man that Eldridge succeeded.  The former chief said, “We’ve been friends for 45-years, and I hope we have 45 more years of friendship on top of that.”  Byrd looked back on their friendship that began when they entered high school at Jacksboro noting that they worked construction together after graduation until Byrd signed on with the LFD while Eldridge kept building homes.  “I eventually talked him into coming to the fire department.  He’s really done a good job as chief,” said the former fire chief.  And that’s no surprise to anyone.  (WLAF NEWS PUBLISHED – 01/30/2020-6AM-PHOTOS COURTESY OF WLAF’S CHARLIE HUTSON)