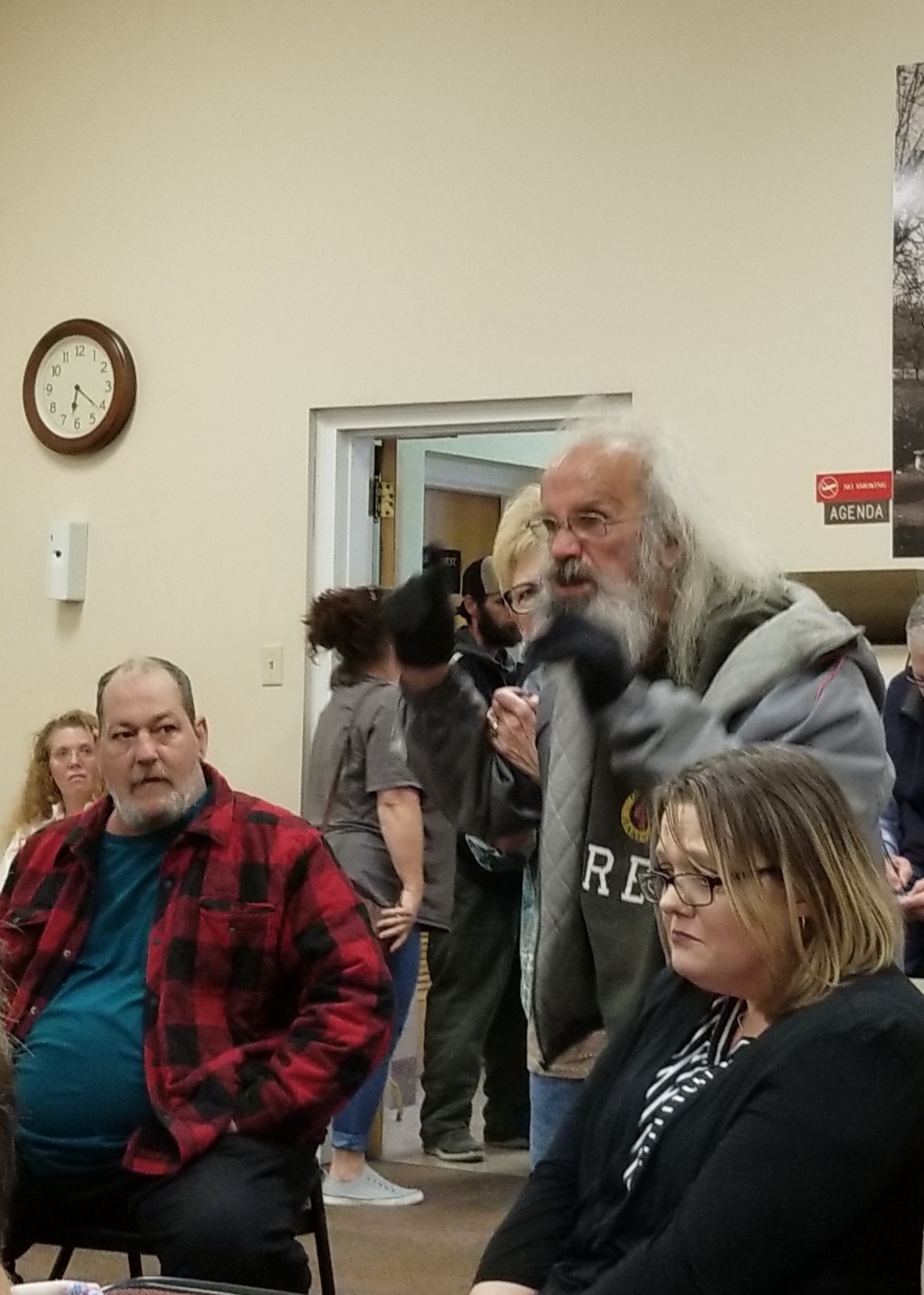 As  Monday’s meeting approached 6:30 pm, John Russell (gray jacket) stood up and said, “A program needs to be put together to help low income people eat.  I’ve eaten once today.”

LAFOLLETTE, TN (WLAF) – Discussion continued Monday afternoon before a full room at LaFollette City Hall about the proposed day center in LaFollette.   Seated at the table in front of the crowd were a few business owners, employees of the Tennessee Valley Coalition for Homeless (TVCH) and Pastor James Coffey with The Harbor to discuss the issues with the center.  Lafollette City Administrator Jimmy Jeffries served as facilitator for the meeting while Mayor Mike Stanfield and Council Member Mark Hoskins attended on behalf of the planning commission.  Missing from the meeting was Katie Goins, owner of Katie’s Restaurant on North Tennessee Avenue.  Goins appeared before the LaFollette City Council at last month’s workshop with saying she had a petition that opposed a day center in downtown LaFollette.

The day center has been in the basement of the First Presbyterian Church on West Ash St. since May 2019.  In February, the center needed to move to a larger location and The Harbor had a large space it offered to let the center use.  That’s where the problem began.  After moving into the building, it was discovered it was not up to fire code and needed a zoning variance to begin operation. The day center came before the LaFollette Planning Commission on Feb. 27 requesting a variance, but the planning commission could not proceed. The fire code issue would need to be corrected before they could proceed. At the February meeting, City Codes Enforcement Officer Daniel Foster explained inside the warehouse there are bags of clothing, no sprinklers and a vehicle housed in the warehouse. Foster explained the building does not meet the C1 zoning and needs a special variance to occupy the space.

As the discussion began Monday afternoon in the 5 pm meeting, Coffey told the group he felt it would be beneficial to know the concerns of the business owners.  Hoskins said one of the concerns was safety and appearance were some of the concerns. Tabitha Bennett who has a salon next to the proposed day center said she would feel safer having the day center next door. Bennett, who was seated at the front table, began to cry as she shared with the crowd “there was a man sitting behind me in the audience and he asked when the day center was going to reopen?  I’m hungry.”

Both these men told the audience that they had been helped; one through the warming center and the other through the day center.

Tana Daugherty with TVCH shared with the group how the people using the day center can help to clean up the City of LaFollette. They need community service hours, and they can get those by picking up litter.

Coffey suggested a 90-day solution for the center. The first solution would be to bring the building up to code and see how things work out in that time frame for the day center. The second solution would be to look for another location with business owners being asked to pledge $100 a month to pay toward the lease of another location. The first solution could only be done if the building is brought up to code and passed.  Then a variance would need to be granted for the zoning issue.

A frail man identified as John Russell stood up and said, “A program needs to be put together to help low income people eat.  I’ve eaten once today.  When the day center was open, I went there daily to get something to eat.”

A member of the audience stood up and said “We need to get the people fed.”  After a few minutes of discussion, it was decided that lunches could possibly be fixed at a different location and brought to the proposed day center location and distributed out the front door. Daugherty told the group that she would contact the health department about policies for distributing the food.

The group eventually decided that a letter would be drafted to business owners in LaFollette explaining the intentions for the 90-day solution. There would be a space on the letter for business owners to mark yes, no or maybe with a space for comments. After the letters are collected and codes are corrected, Planning Commission Chairman Joe Bolinger would then be contacted to call a special called planning commission meeting.  (WLAF NEWS PUBLISHED – 03/10/2020-6AM)