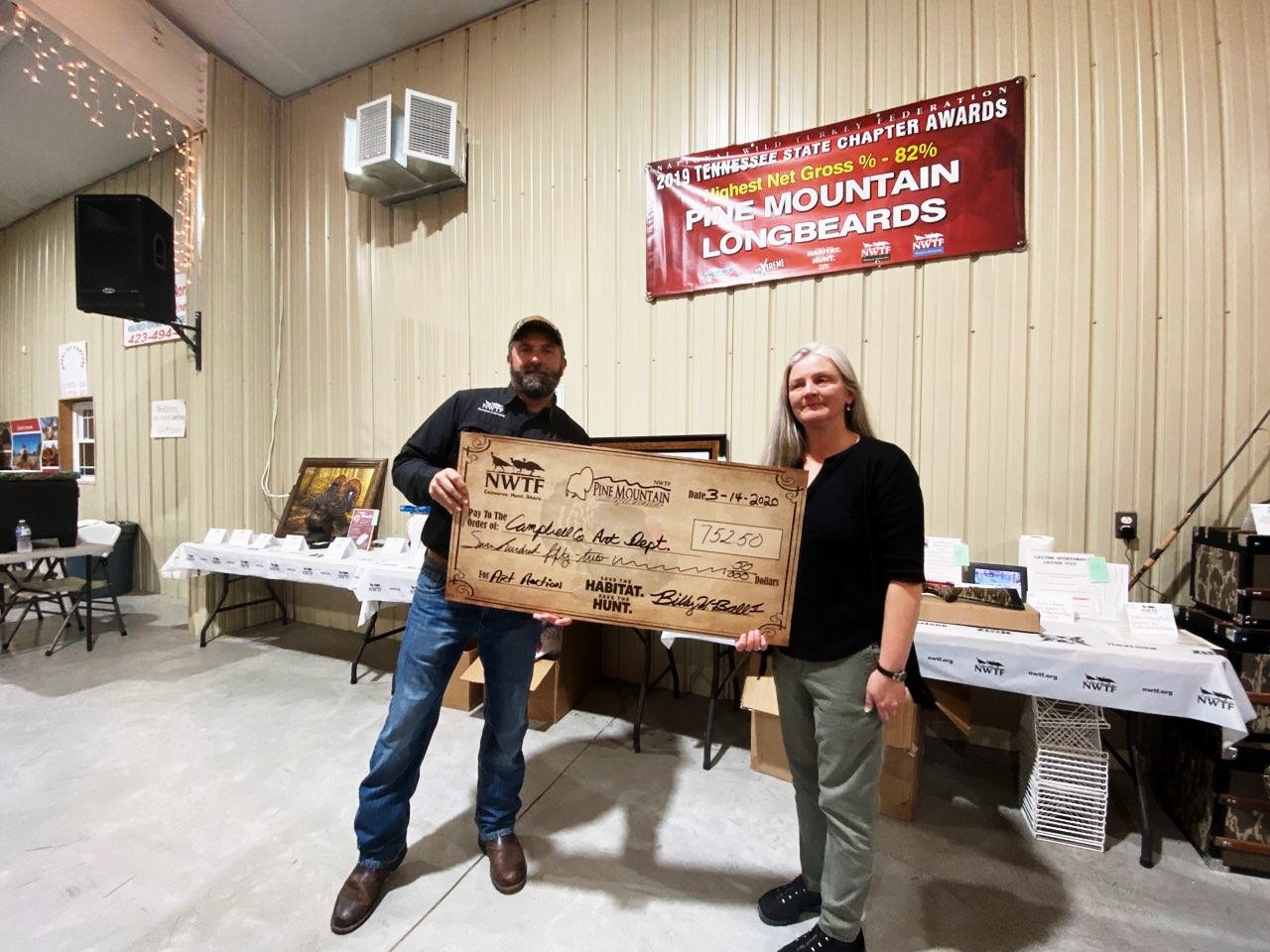 High school art teacher Terri Chaniott (right) accepted the $752.50 check that was donated to the CCHS art department as a result of the art auction.  Durand Carmany with the Pine Mountain Longbeards is on the left.

By Charlotte Underwood
LAFOLLETTE, TN (WLAF) – The Pine Mountain Longbeards chapter of the National Wild Turkey Federation held the 19th annual Fundraising Banquet and Auction on March 14, at Ball Farm Event Center in LaFollette. It was another award winning year, with the chapter receiving 13 national awards and being recognized as number seven in the nation for fundraising, membership and community activities.   This earned the chapter the Royal Slam Club Award, which was given to the top 10 elite clubs in the nation. Campbell County’s Pine Mountain Longbeards is number seven in the nation out of 3,300 chapters.

According to chapter president Billy Ball, the banquet and auction was well attended.  “We had a great crowd; we always have wonderful support from the community,” Ball said. 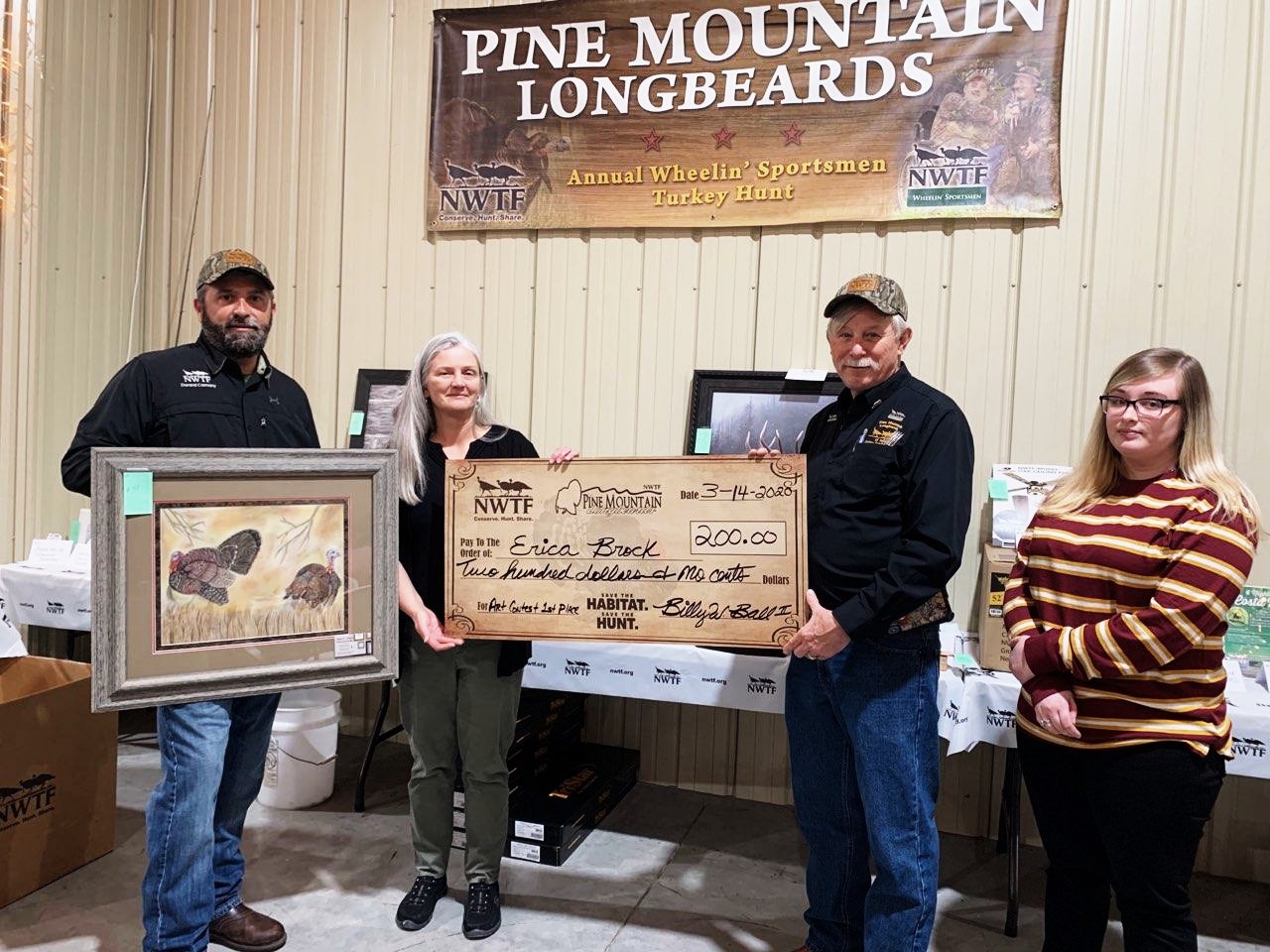 Erica Brock, far right, won first place and $200 for her art work in the turkey art contest held by the Pine Mountain Longbeards chapter of the National Wild Turkey Federation. Her art was framed and auctioned off. It recieved $905 the first time, was donated back and auctioned again for $400 before being donated back again and receiving $200. The total was split, with half the proceeds going to the high school art department.

Prior to the banquet, the Pine Mountain Longbeards held its annual turkey art contest for the high school art students. Erica Brock won first, Haley Tetro won second and Skylar Byrge won third. “All three artists did great.  We have had some pretty amazing artwork over the years,” Ball said.  The first place winner won a cash prize of $200, second received $75 and third place earned $50.  The first place art work was framed and auctioned off during the banquet. The auction proceeds from the art work was split between the non profit and the high school art department. This year, the art work was donated back two times and brought a total of $1,505 after being auctioned off three times. This was split, giving the art department a donation of $752.50.

The Pine Mountain Longbeards host multiple events throughout the year. The annual banquet and fundraiser helps cover the costs of such events, as well as scholarships for local students.

Trace Childress was the recipient of the $1,000 Kathy Childress Scholarship at Saturday’s banquet. The scholarship was named after and given in honor of Trace’s mother who passed away from cancer. 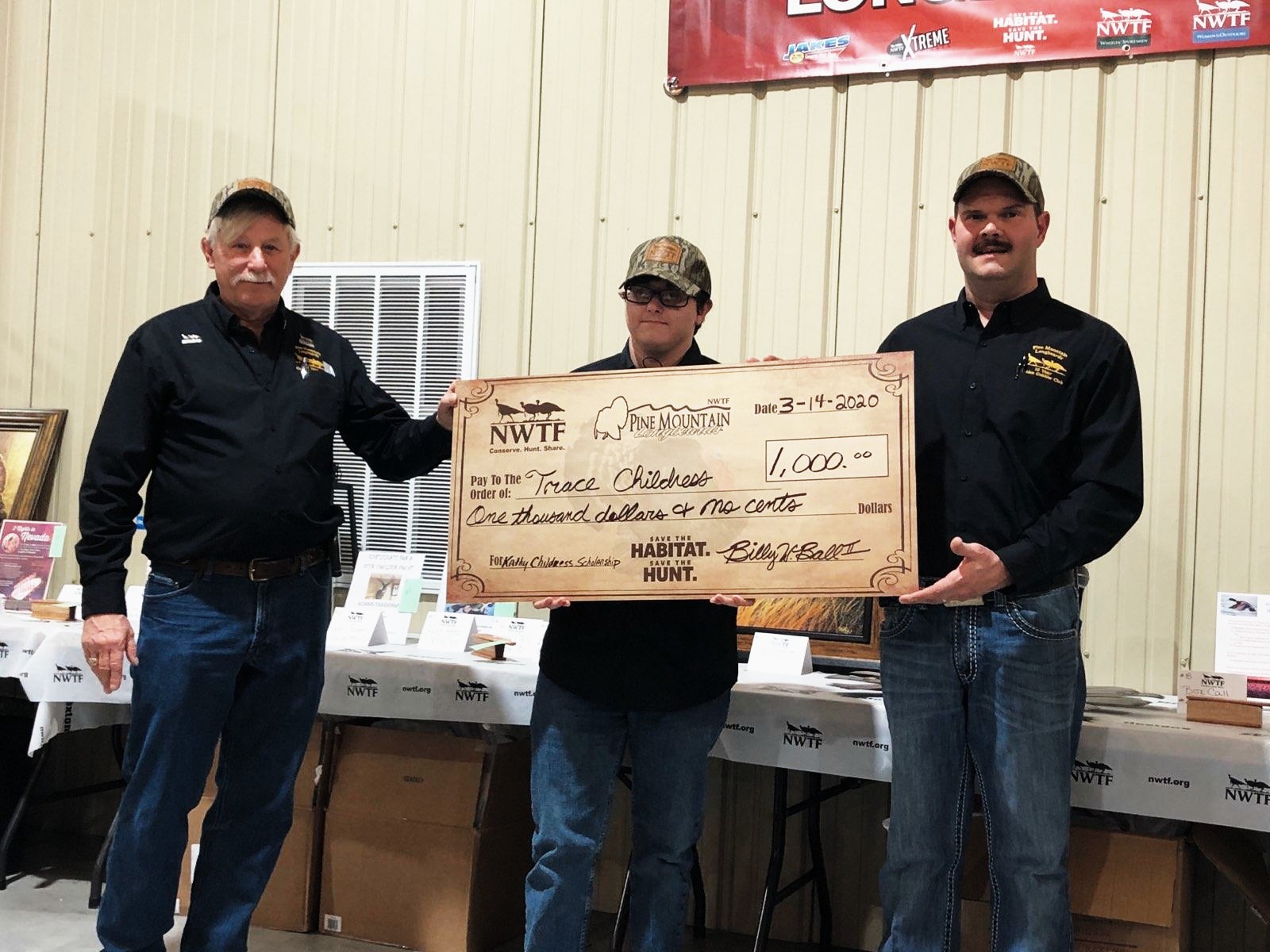 The next event coming up is the Wounded Warrior & Wheelin’ Sportsman hunt on April 28.

The tenth annual Jake’s Day will take place in August and at Christmas.  The organization will fund 135 food boxes for local families as part of the Turkey Hunters Care Food Box distribution program. They also host various youth hunts and Women in the Outdoors programs.