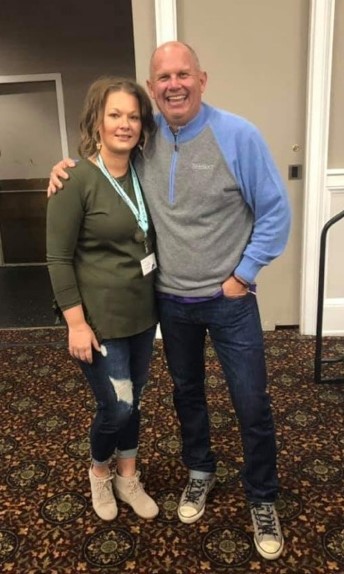 TOP PHOTO:  Monica Poston is with Dr. Stephen Lloyd at the 2019 Certified Peer Recovery Specialist Conference at Nashville.  Dr. Lloyd has been in recovery since 2004 and is now the Medical Director for the Substance Abuse Services for the Tennessee Dept. of Mental Health. Between these two, hundreds to thousands of lives have been saved from addiction.
By Charlotte Underwood
LAFOLLETTE, TN (WLAF) –  Monica Poston is the embodiment  for a life in recovery.
She is a mother of four, a loving wife and a recovered drug addict who is about to start a new job with the Knoxville Metropolitan Drug Coalition as the Lifelines Regional Director for Region II. She has been working in the field of addiction for several years since her own battle and recovery with drugs. 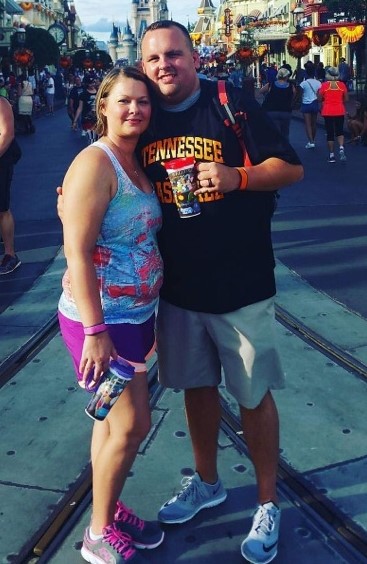 We met the day before she left to come back to LaFollette in 2014. We married Feb. 8th, 2015, and this is our honeymoon pic.  Monica and husband, Corey Poston.
She is in two state databases about recovery for going on seven years clean from Heroin.  Her story is one of inspiration and hope.
According to Poston, drug addiction can happen to anyone, and it’s something most all families are affected by, especially in East Tennessee where opioid addiction is prevalent.  For her, she said it started literally with postpartum depression. At the time, she said she didn’t know what postpartum depression was and was afraid to ask for help. “A pill made it feel better, then a year later, I’m shooting up, and it just consumed my whole life,” Poston said, explaining how quickly addiction can happen. 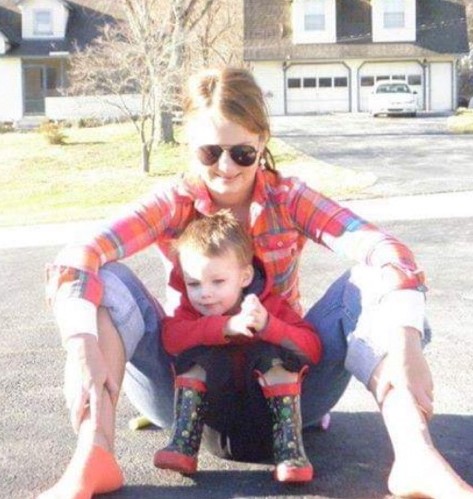 Monica’s husband Corey said, “This one she calls the face of addiction; fake smile, suicidal, no hope. This was right before she attempted suicide and eventually led her to change her life and go to rehab.”  That’s her son Bentley with her.
She stayed in active addiction for around three years. Her depression was so deep she attempted to commit suicide twice and “was devastated” when she woke up and realized she was still alive.  “I woke up and did it again. At that point, I just told God that I was ready to be done or that he was going to have to open a door, because I couldn’t continue to live that way,” Poston said. 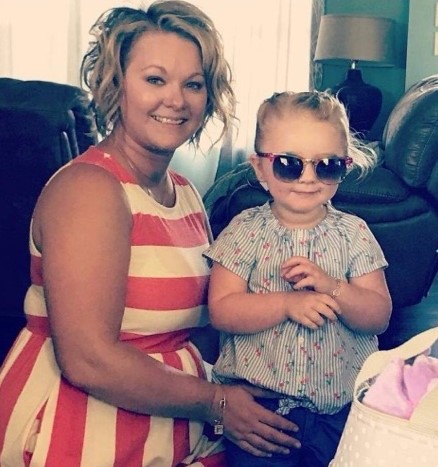 The Postons had a daughter, Nova Grace Poston, in 2015.
The door God opened was to Buffalo Valley, a recovery center. The day after she tried to commit suicide twice, Poston called Buffalo Valley and was told they had a detox bed available for her right away. “I told God at that point, I’m going to give it all I got and never look back and that’s what I did,” Poston said. This Nov. 14 will mark her seventh year of being drug free. She said she remembers that landmark day “better than her birthday.”
Poston originally left the area with no intention of coming back to Campbell County because she was “afraid to come back” and possibly relapse back into old habits. She said she just wanted to be able to take her son somewhere and be happy. Several months into her recovery, she came back to see her son at Easter. She had not seen him since leaving in November when he was only two and had only been able to speak to him on the phone.  “He was too young to understand why mom wasn’t there.”
While in recovery, Poston completed her Bachelor’s degree. After returning to Campbell County, it took her around two years to find a job. “I was grateful for that time period; I did a lot of growing and also got married during that two years, had another child and became a step mother so those were big roles to me that mattered and I had to learn to wear those different hats,” Poston said. She said she felt God had bigger plans for her than she could ever have dreamed of.
Her first job after recovery was at the local domestic violence shelter as a court advocate helping women get restraining orders. While in that role, the opportunity to become a case manager for the Eighth Judicial District Recovery Court arose, and that was her “dream job.” Poston worked for recovery court around two and a half years before taking a job at Ridgeview as a recovery specialist, working with recovering drug addicts. She continued to sit on the drug court board as well. May of this year would have marked two years working with Ridgeview, but the opportunity arose to work with the Knoxville Metropolitan Drug Coalition.
Her first day was last week.  “I had been praying for another opportunity to grow in my career, and this one opened up. The whole job is about bringing resources into the communities that are really rural,” Poston said, adding that she hoped to be able to help Campbell County and make it a better place.
Growing up, Poston was in state custody until she aged out of care.  Campbell  County was where she started middle school, and it was the longest time she had ever been in a foster home. 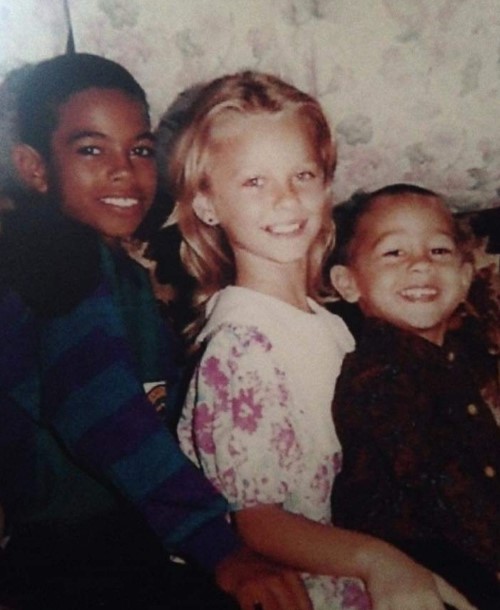 This is Monica at the age of 6 with her two brothers. Shortly after, all three were separated and placed in states custody. She said, “Jumping from family to family made me an angry child. I grew up learning inappropriate ways of coping, but it made me the adult I am today.”  Damian is on the right with Michael on the left.
“Her name is Corranie Herrin.  I was with her for seven or eight years. She was just a beautiful woman with a beautiful family. It was the first time I had ever felt I belonged. That is why Campbell County is my heart and soul,” Poston said.
She said she wants her story to be an inspiration for her community. “There is hope.  There is life after being an addict. We can do amazing things; we have to fight as hard as we did to get high, in order to stay clean,” Poston said.
She does not want relapse to be part of her story so she stays actively in touch with her sponsor, who is in Chattanooga.  Poston credits support from her family and her sponsor for helping her stay clean. “My family keeps me going, my husband and kids keep me me going,” Poston said. Her message to other addicts or anyone battling with recovery is to “blindly step out with hope and faith because it is beyond worth it.”
“Almost every family suffers from addiction and the fear of the unknown can be crippling, but don’t let it keep you stagnated and in active addiction,” Poston said.
Addressing the physical, mental and spiritual part of recovery is something she has to do daily in order to fulfill her other roles in life. It’s part of her recovery and an important part of recovery for others. This includes community support and education
Still active in drug court locally, Poston said she is a first hand witness to the possibility of recovery in others and her goal is to educate others about this and rally community support. “These girls are doing amazing things, buying their first home, getting custody of their children back, getting their degrees and celebrating being sober all right here in our county. We need to lift them up and celebrate these stories of recovery. We need the community to get behind these recovering addicts, to support them and not judge them.” (WLAF NEWS PUBLISHED- 03/25/2020-6 AM)