TOP PHOTO:  It was part of the Sunday routine.  Rev. Eugene Wells (left) and his brother Rev. Terry Wells (right) would always arrive a little after noon and check in with WLAF’s Jim Bunch for a visit before heading to the studio for their 1pm radio broadcast. 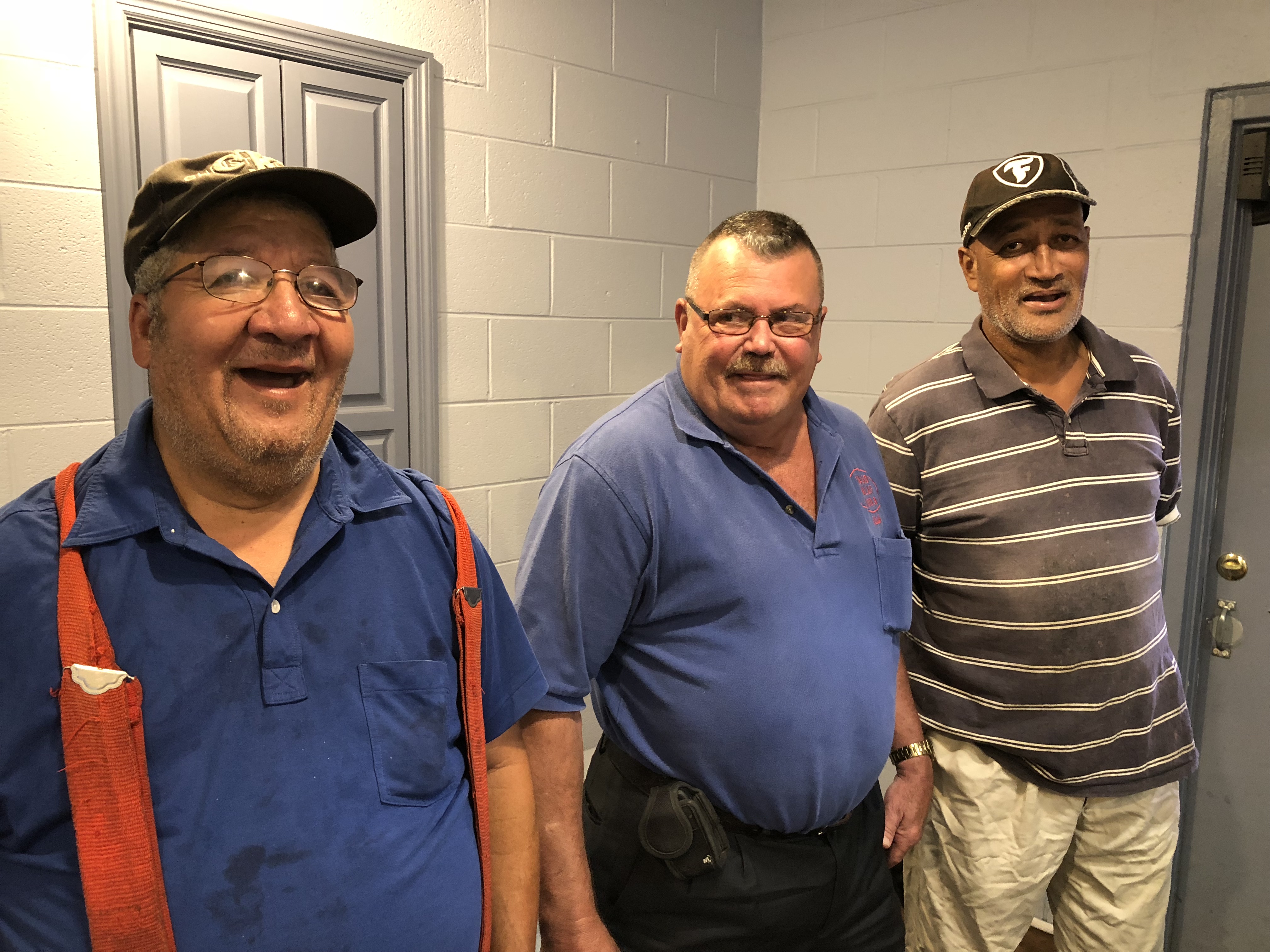 LAFOLLETTE, TN (WLAF) – It was a phone call I would like to have not received.  It was the call saying that the Rev. Terry Wells had died.

Wells was a part of WLAF’s extended radio family, and had been a friend of mine since childhood.  I even had to call someone to get his phone number to talk to his brother, Rev. Eugene Wells, upon hearing of the sad news.  There was never a need to have Terry’s phone number for me, because I saw him virtually everyday when he and Eugene would stop by the radio station to say “Hey.”  However, on the cold or rainy days, we’d just see Eugene, because Terry wasn’t too eager to leave his recliner.  Terry and his recliner were a running joke, because when we didn’t see him, we knew where he was.

Terry came to be called Brother Terry in the late 1970s.  It was rare one Wells brothers’ name was not mentioned unless the other’s was.  It was always Terry and Eugene.  It was equally as rare to see one without the other.

Listen HERE for an archived sermon from Rev. Terry Wells.

Make no mistake, Terry was the older of the two brothers.  Although there was the rare occasion he had to remind Eugene of that.

“I loved Terry. What a great man. Prayers to Eugene,” said Arnie Meredith.  Though much younger than Wells, Meredith had known Brother Terry since his early years.

“Gene” is often how Brother Terry referenced his younger brother of about 16 months.  We all had some fun with him when he turned 60 last May.

Brother Terry was proud that his birthday fell on the same day as his doctor’s birthday, Dr. James Farris.  The two shared May 23rd.

Terry frequently recalled his high school days of being the manager for the basketball teams at La Follette and later Campbell High Schools.  The LHS Coach, Jerry Dagley, was one of his favorites, and he always held fond memories of the old coach.  Dagley suited up the team in coat and tie, and Terry was no exception.  He had the smallest orange blazer they made, and it was still too big.  The sleeves went all the way to his finger tips before it was taken up to fit his tiny frame. 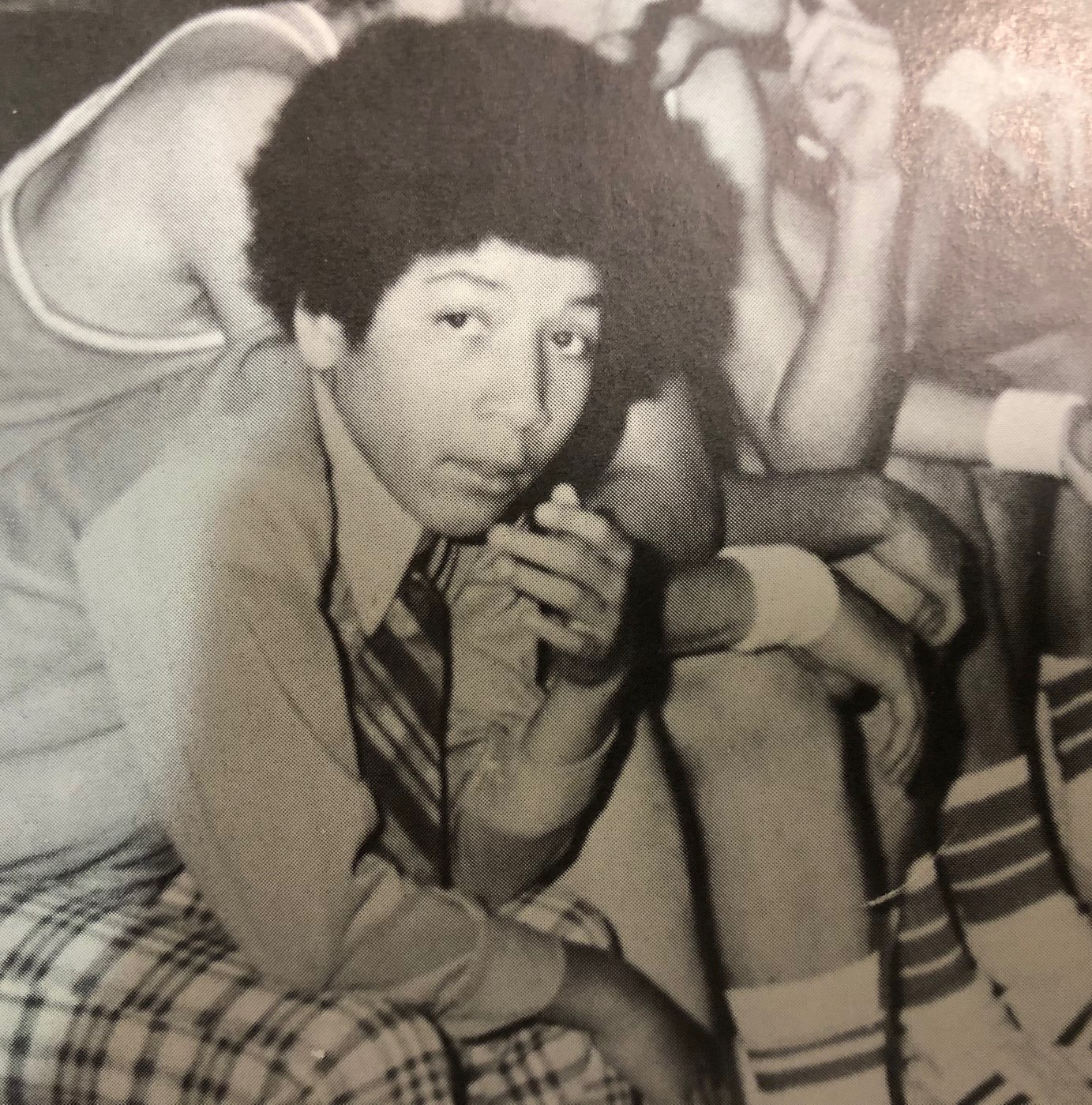 Brother Jerry Gray said, “Terry loved Jesus. He will be missed, but we will get to see him again. He was a great man in La Follette.”

“We lost a friend Friday night.  He sure was an asset to our community,” said La Follette City Council member Bill Archer.

Pam Olivio said, “Oh, how I will miss talking to him at La Follette Church of God on the phone. He called in prayer requests twice a week. He would ask if we had any requests that they could remember in prayer.  Brother Terry was a wonderful, sweet gentleman. He would always ask how the person was I asked him to pray for.  A great prayer warrior has gone home. Rest in peace my friend. Prayers for Eugene.”

Terry started school in first grade at West La Follette School.  Dan Freeman said, “Terry and I were in the same class together with teacher Edna Lambdin.”

“He wasn’t much for school.  As soon as mom would send him through the door at the school house, he was coming out another.  It took him a little while to realize what school was all about,” said Brother Eugene.

He and Eugene walked about everywhere they went.  Though there was the short-lived time Terry had a car.  He came by the radio station one day with a big black eye and told us he’d had a wreck and that his driving days were over.

Brother Terry’s ministry began in the 1970s on WLAF.  He would attend many of the live broadcasts that originated at the WLAF studio, and most times the program’s pastor would ask if Terry had anything to share.  He eventually graduated from a comment or two to a full sermon on the radio.  He gave his last sermon on April 5th.

“He enjoyed his weekly broadcast and always looked forward to going to church,” said Brother Eugene.  Terry wore a smile most all the time.  Gene said, “He never complained about anything though he did love people and was always willing to help someone.” 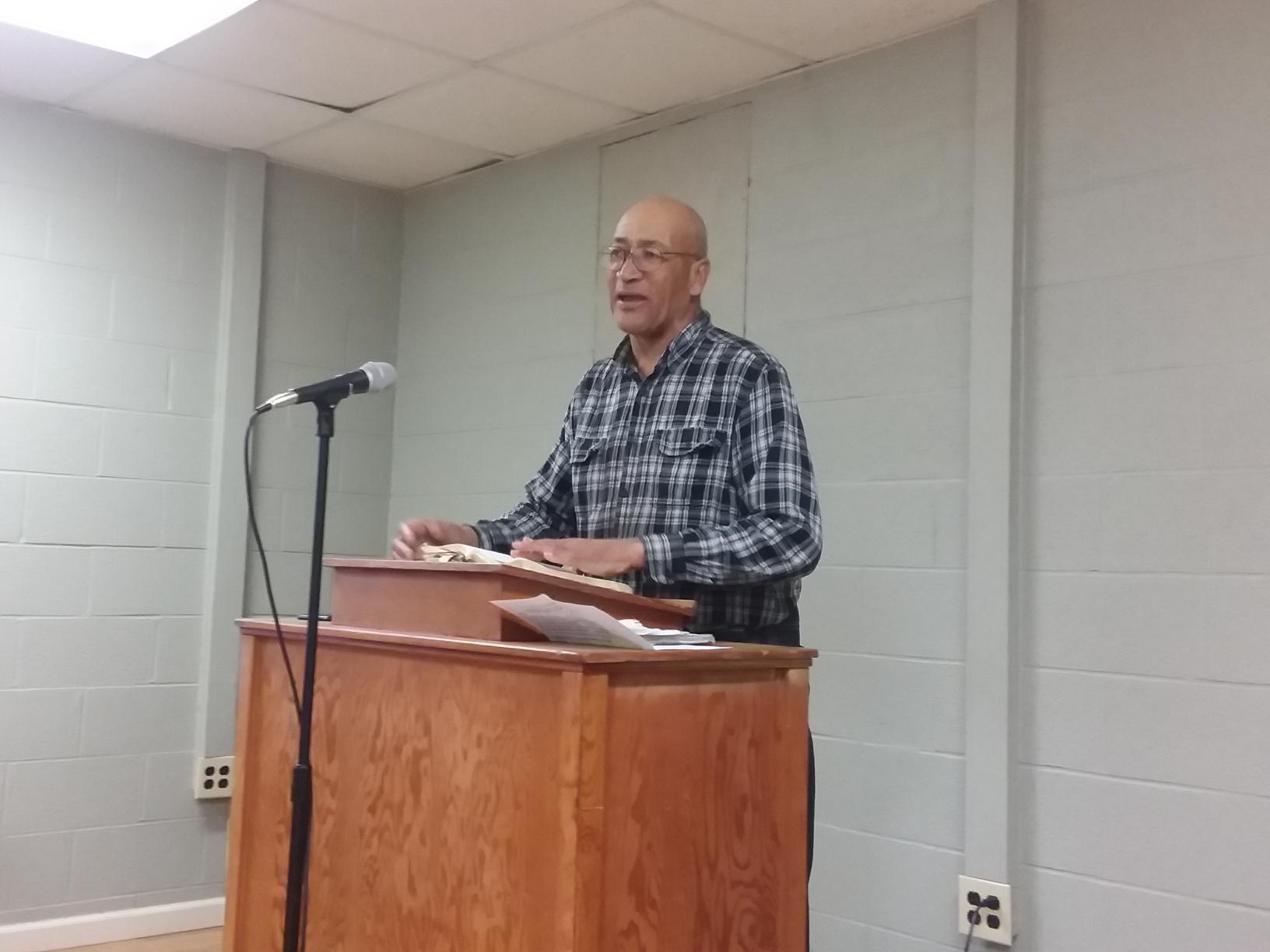 Beginning in the 1990s, Rev. Eugene Wells joined his brother Terry to host an hour long broadcast on WLAF radio.  Gene said, “I’ll continue the broadcast, because that’s what he would’ve wanted.”  So, on Easter afternoon at 1pm, Brother Eugene was on the air. (PHOTO COURTESY OF WLAF’S AARON HOPKINS)

The very first broadcast Terry was ever a part of was with the late Rev. Clarence Walden in the basement studio at WLAF.  Eugene recalls that it was Pastor Walden who first asked for Terry to share a thought to the studio congregation as well as to the radio audience.

“We did well getting along together as brothers.  Though we did have our moments especially as children,” said Eugene.  From a very young age, Terry wore a scar on his forehead from a punch with a brick from Brother Eugene.  Eugene said, “Earlier in the day, before I hit him with a brick, we were tussling over a new wheelbarrow, and Terry yanked the wheelbarrow, and it cut my finger.  That required a visit to the emergency room and stitches.”

Brother Terry will be laid to rest Tuesday at 1 pm at Woodlawn Cemetery.

5 Replies to “Rev. Terry Wells left the world leaving memories with many”