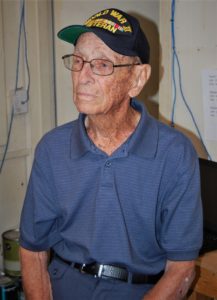 WLAF remembers D-Day by sharing a story of photos and memories from WWII Veteran Bud Petitt and State Representative Dennis Powers they shared in a June 2019 D-Day visit to WLAF.

LAFOLLETTE, TN  (WLAF) – One of Campbell County’s World War II veterans took time to pay a visit to WLAF on Thursday, the 75th anniversary of D-Day.

Edward “Bud” Petitt and his unit landed on Omaha Beach at Normandy, France, a few days after the initial invasion.  He said, “The first thought I had was I don’t know how anyone survived that invasion.”

State Representative Dennis Powers, who toured Normandy a couple of years ago, visited with Staff Sergeant Bud Petitt on the air Thursday morning on WLAF.  Powers pointed out that he learned that on that first day when so many American soldiers were killed, the Germans were holding a training session and had many many more soldiers at that site than usual. 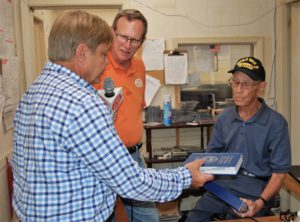 CLICK HERE to listen in to the June 6, 2019, Bud Petitt-Dennis Powers interview.