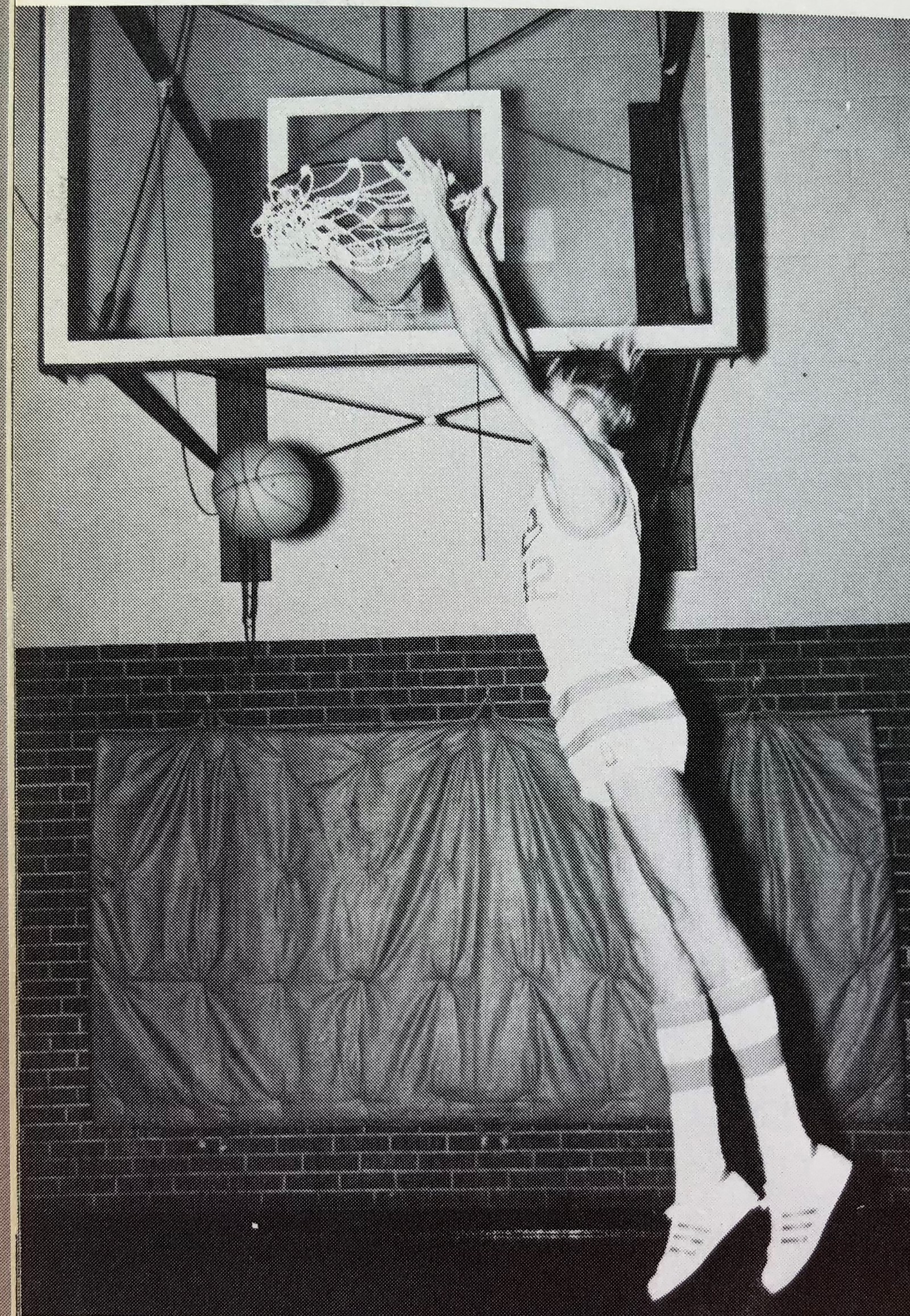 TOP PHOTO:  Gary Gray dunks for the camera in the Fall of 1969; his junior season as a La Follette Owl.

LAFOLLETTE, TN (WLAF) – In 1967, La Follette High School Head Basketball Coach Jerry Dagley organized a freshman basketball team, because Gary Gray was not good enough to play on the B-Team (Junior Varsity).  Dagley’s logic was to find a place for someone that tall to be able to play and be on the team.  Gray had the height, 6’6″, but not much else.

As freshmen, Gary and his 6’3″ twin brother, Jerry Gray, were suited up but sitting the bench in a B-Team game.  Dagley said, “We had a good enough lead so I thought I’d get the Gray boys in the game.  I called them over to me and told them it’s their turn to play.”  Rather than checking-in at the scorer’s table, they both just raced out onto the floor in the middle of game action.

The long and lanky Gary had an unmatched desire to play and succeed, and it drove him to a starting role on the Owls varsity team his sophomore year.  Gray worked hard and attended the Carson-Newman Basketball Camp the summer after his freshman year and the following two summers.  He became good enough to play on the B-Team as a sophomore and on the varsity the last several games of that season and then in the tournament. 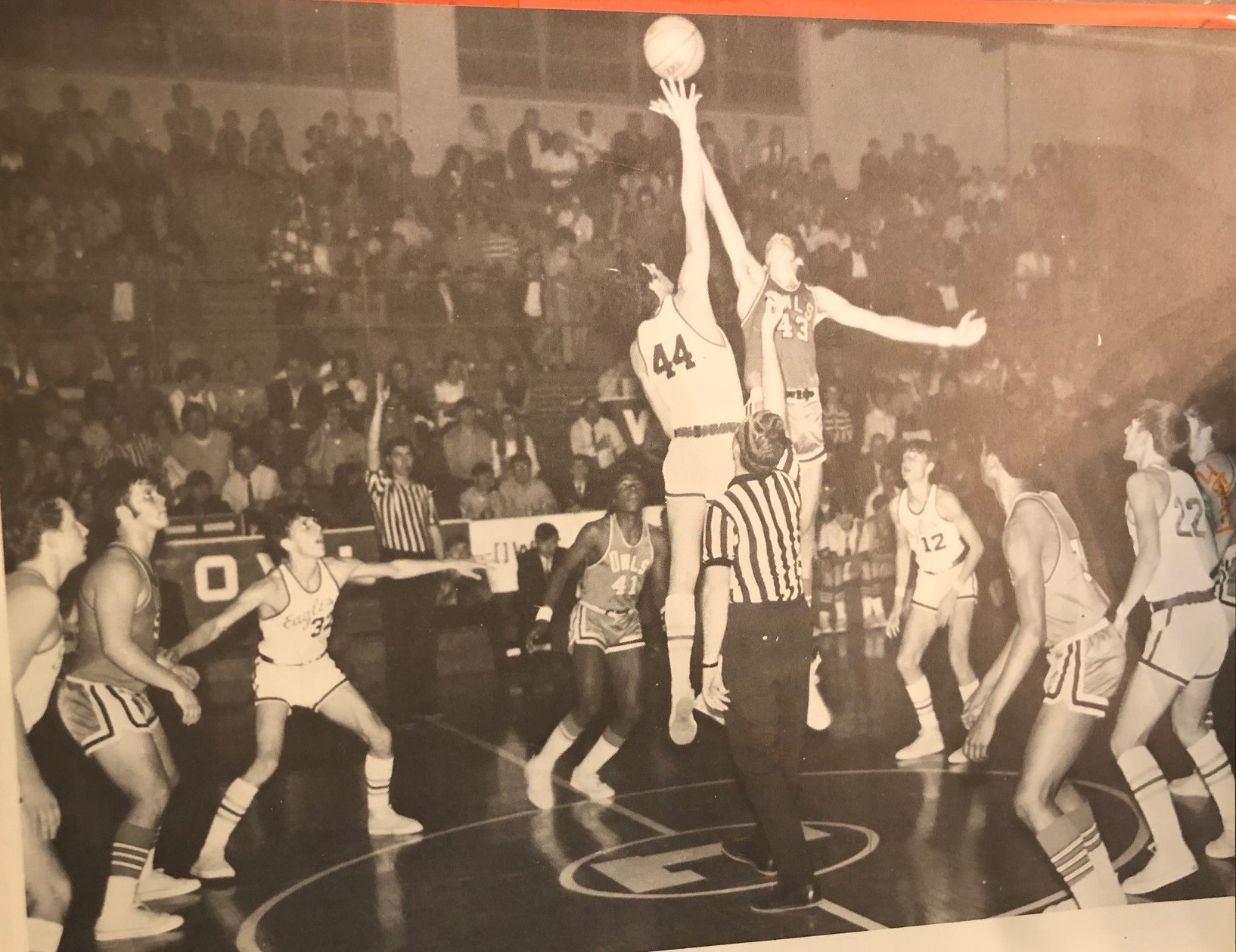 Lawrence “Bucket” Brewer, the Owls big man up front, was diagnosed with leukemia late in his senior season and was forced to leave the team.  Bucket’s misfortune led to Gray being moved up from the B-Team to a starting role for the Orange-n-White’s varsity.

La Follette won over the Senators at Norris in Gary’s first start in an Owl varsity game.  On the bus ride home senior and fellow starter Sam West told Gary, “Hey, big boy, I told you you could do this.” 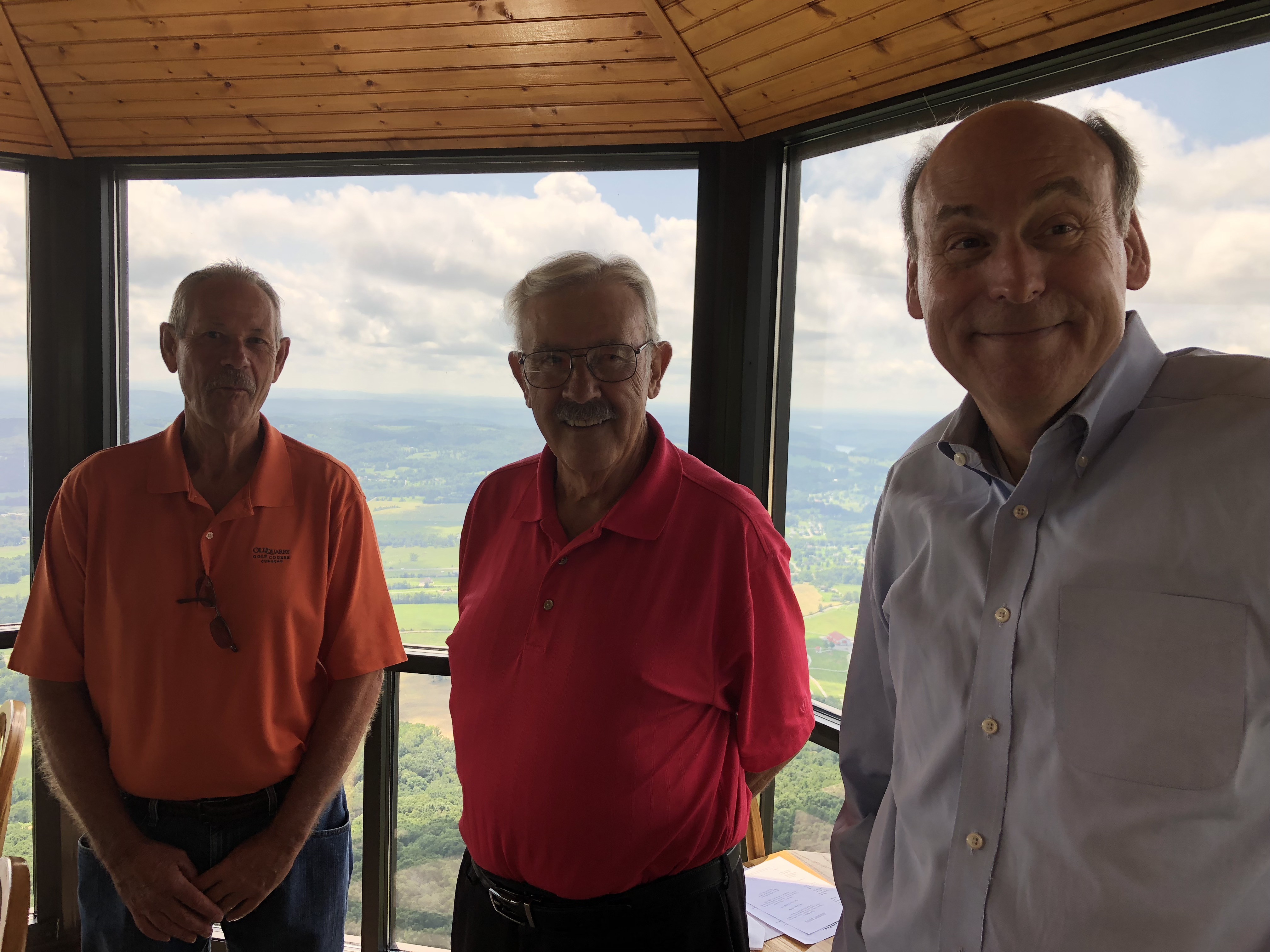 The only time I can recall Gary ever becoming upset was one day in practice when teammate Keeton Jordan jumped on Gary’s back.  The fact that Keeton had put on a lot of weight in the off season didn’t help matters.

Some of Gary’s more memorable games I remember included Norma, now a part of Scott County High School.  The Wildcats featured the left handed Number 22 Henry Hutson; a bruising up front player at about six-four and a solid 215 to 225 pounds.  Rumor was Hutson had tickets to any Tennessee game he wanted.  Hutson was really, really good, but he could not keep Gary in check.  La Follette won both meetings that season with Norma.

February 5, 1971, was the night Gary etched his name in La Follette High School Basketball History.  Coalfield was in town led by Head Coach Jimmy Davis.  Davis was a key member of the Owls team that was state runner-up in 1954.  But on this night, it was all Number 42.  In the win, Gary broke not only Carl Rutherford’s 42-point single-game scoring mark, he also eclipsed Jimmy Pierce’s single-game rebounding record of 27.  Gary finished with 45 points and 28 rebounds, and he didn’t even play the entire game. 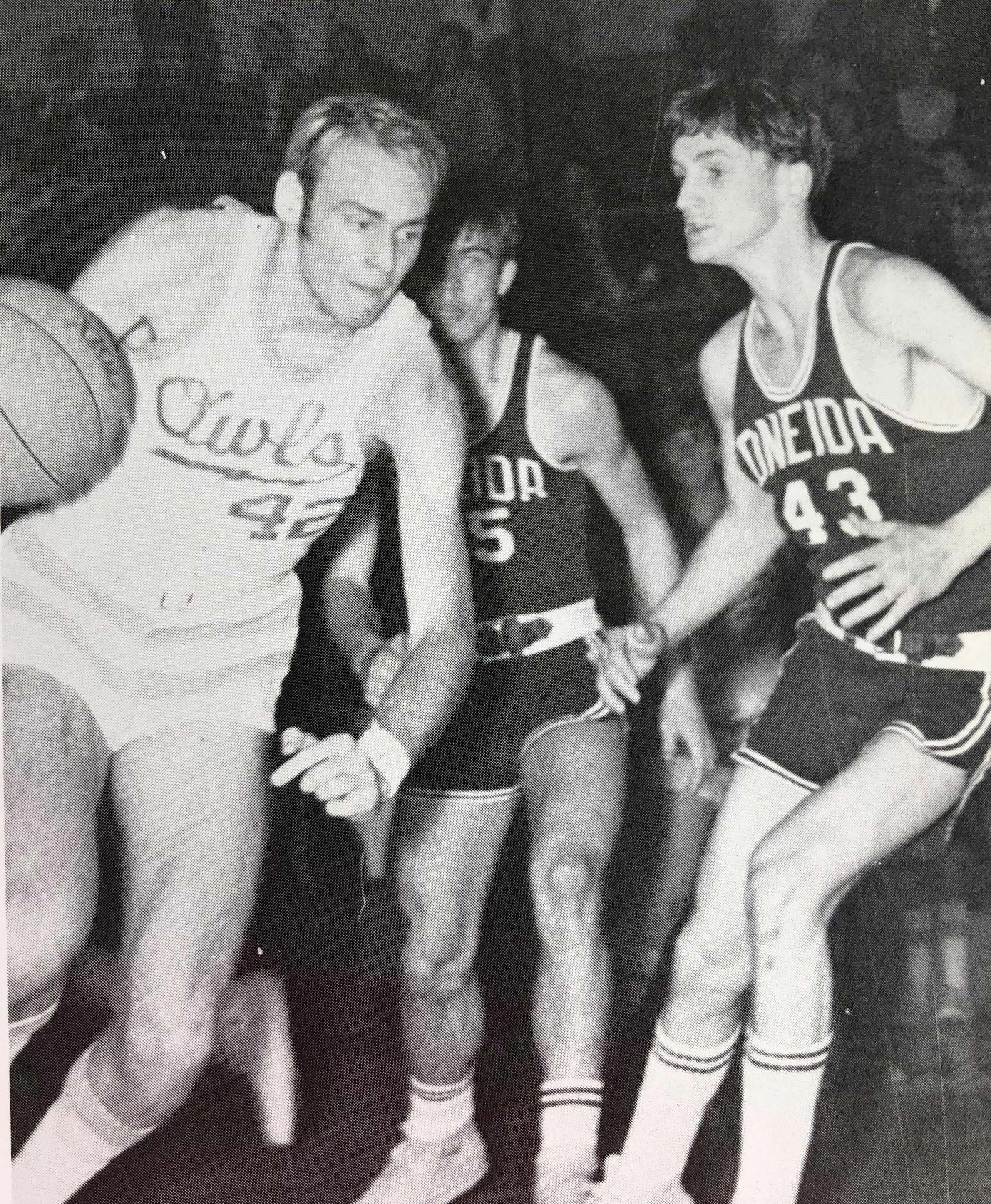 Gary Gray drives to the bucket against the Oneida Mountaineers from Kentucky.

That improvement continued into Gray’s senior season.  I remember the night La Follette lost a very tough game at Oak Ridge.  Gary battled all night with the Wildcats’ big man Ricky Muckenthaler.  Gary won the battle, but Oak Ridge won the war.  After we’d all gone back to the locker room following the game, one of the officials came up to our coach, Bill Young, and said, “Make sure you tell Number 42 that he played one hell of a game.”

On a funny note.  WLAF’s play-by-play announcer Paul Wright let one slip on the air that night at Oak Ridge.  Somewhere during what was a tense game, an Owl missed a lay up.  Paul said, “And he blows the damn lay up.”  Fellow Owl Vic King taped all the broadcasts, and we all had a chuckle at Paul’s call.

Muckenthaler signed and played at the University of Tennessee at Chattanooga and later transferred to Carson-Newman where he played and then graduated.  Gary had been courted since early in his junior season by new NCAA Division I-A member Samford out of Birmingham. That’s where he signed and played for four seasons. 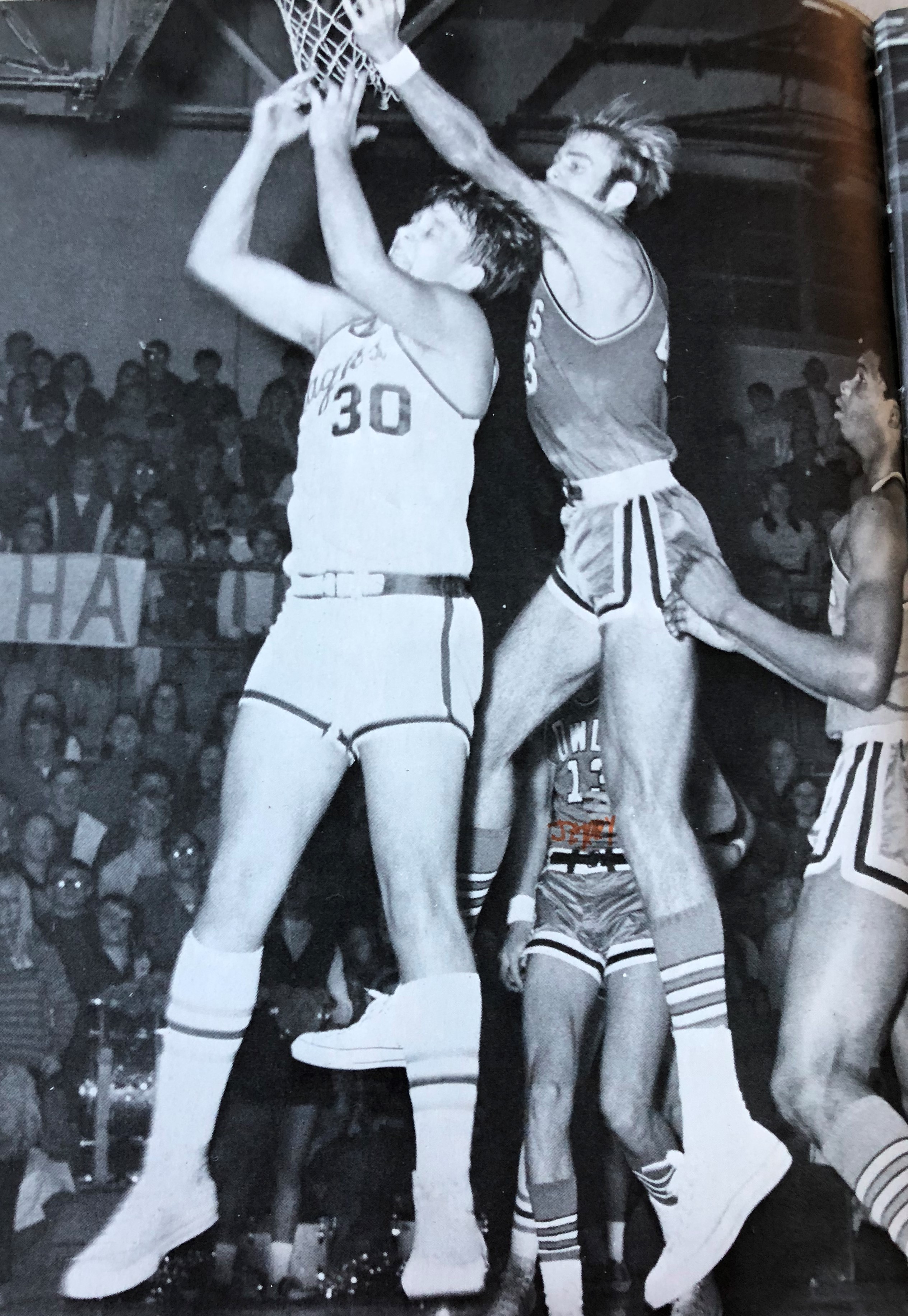 Gary Gray tries to get a hand on a rebound as he battles with Jacksboro’s David Russell.  Curt Houston looks on for the Owls.

However, Samford almost didn’t get Gray Brother Number 1.  Up into Gary’s senior year, Georgia Tech’s Head Coach Whack Hyder, with his team in the midst of a 23 & 9 campaign and an eventual second place finish in the NIT, began pressing Gary to sign with the Yellow Jackets.  Gary explained to the coach that he had already committed to Samford even though he had not yet signed scholarship papers.  Gary told the coach he’d talk it over with his parents, and he did, but felt he needed to keep his word to Samford Coach Van Washer, and he did.

Gary came back and practiced with us one day during his freshman year at Samford.  His improvement since the season before was amazing.  A funny story he shared from that freshman year at Samford came during a freshman game, a couple of years before freshmen were eligible to play varsity in the NCAA.  It was Samford versus Alabama, and Charles Cleveland was guarding Gary.  Keep in mind Gary had no idea who Cleveland was, and early in the game, Gary pulled up for a jump shot in front of Cleveland and nailed it.  Gary said the crowd oohed and ahhed.  Gary’s next jump shot attempt over Cleveland was blocked and ended up in the bleachers.  Charles Cleveland was named 1st team All-SEC all three of his varsity seasons.

La Follette High School senior Gary Gray dunks for the camera in the Fall of 1970.

“Gary is a success story,” said Dagley.  By his senior year at LHS, there’s no doubt Gary Gray, the not-so-good freshman, was the best basketball player to ever suit up for the La Follette Owls.  (WLAF NEWS PUBLISHED – 08/10/2020-6AM)

2 Replies to “Georgia Tech couldn’t get Gray to waiver”