LAWRENCE, KS (SPECIAL TO WLAF) – The Coastal Carolina football team, under the leadership of Campbell County’s Jamey Chadwell, opened up the 2020 season with a 38-23 road win over the Kansas Jayhawks out of the Big 12 in the two teams’ season opener on Saturday night at David Booth Kansas Memorial Stadium.  The Chanticleers are now 2-1 against Power 5 opponents under Head Coach Chadwell.Coastal, who defeated the Jayhawks 12-7 last year at Memorial Stadium, used three takeaways and scored the first 28 points of the contest to run out to a big lead in the road win.

With the win, the Chanticleers are now 2-0 versus Kansas and start the season off at 1-0 for the first time since 2017.  Chadwell now has a 2 & 0 mark versus Kansas Coach Les Miles.  Miles coached LSU to a national championship in 2007 and is in his second season at Lawrence.

Coastal totaled 318 total offensive yards for the game, 185 on the ground and 133 through the air, while Kansas recorded 367 total yards on 178 rushing yards and 189 passing yards.

However, the Chants took advantage of three takeaways which led directly to 21 points to storm out to an early lead in the victory. 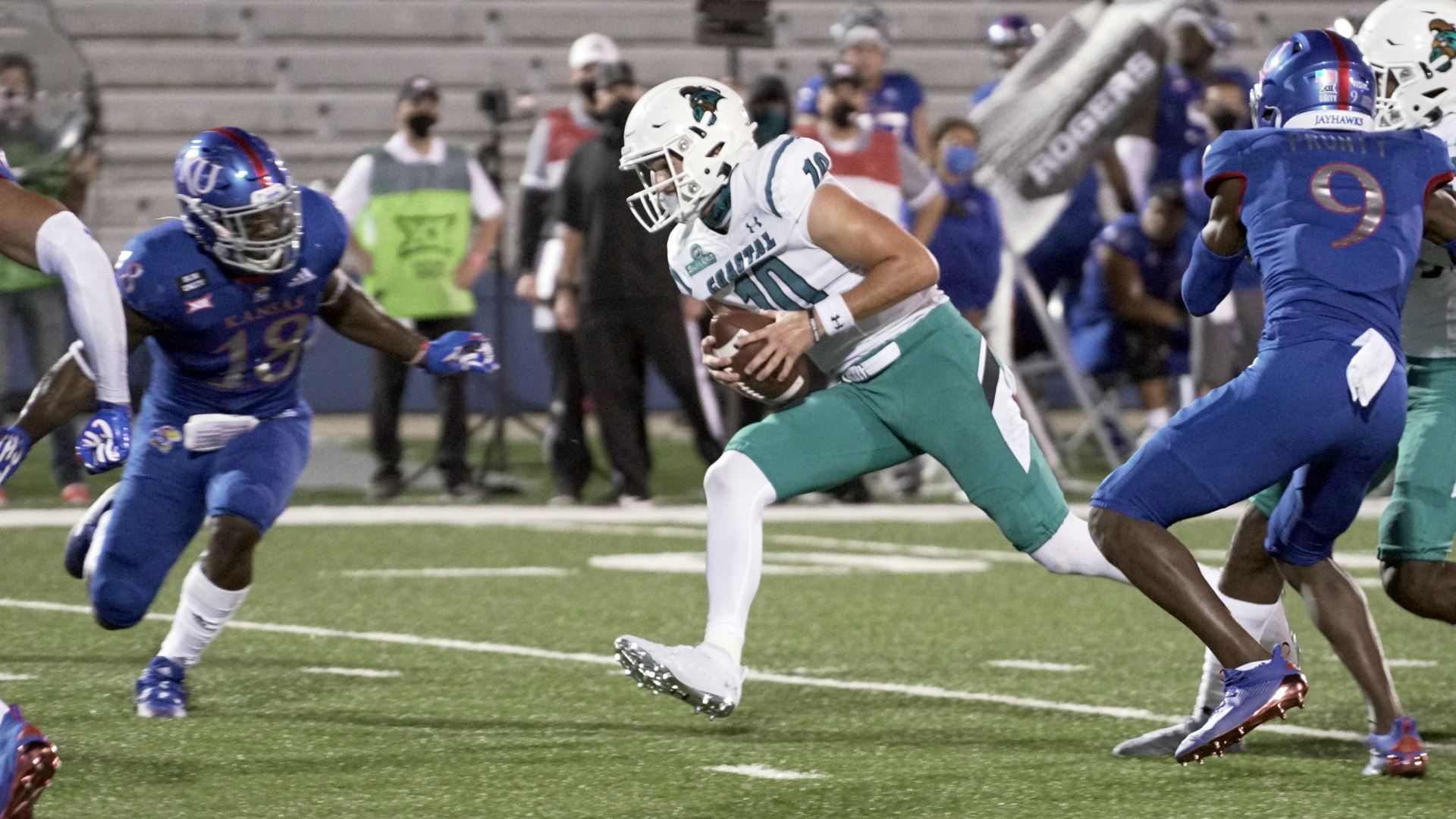 In his first career start, redshirt freshman quarterback Grayson McCall (above) went 11-of-18 for 133 yards and three touchdowns via the passing game, while connecting with six different receivers. He also rushed 11 times for 73 yards and two scores.

Senior running back CJ Marable ran for 75 yards on 21 carries, while juniors Jaivon Heiligh (three catches, 74 yards) and Isaiah Likely (three catches, 47 yards) each had a touchdown reception in the win.

Miles Kendrick led the KU quarterback trio with 156 passing yards and two touchdowns on 15-of-24 attempts. However, he was picked off once and sacked twice by the Coastal defense.

The Chants “Black Swarm” defense got things going for the visitors in white, as junior cornerback Derick Bush hauled in a tipped pass attempt for an interception to end KU’s opening drive and give the ball to the CCU offense.

Led by McCall, the Chants’ offense drove 62 yards on 10 plays capped off by a scramble up the middle and leap into the end zone by the redshirt freshman quarterback to put the visitors in front 7-0 early in the first quarter.

On the next Kansas offensive possession, cornerback D’Jordan Strong forced a fumble on a big hit out in the flat which was picked up by Makonzo to give the ball right back to the Coastal offense on the Kansas 28-yard line.

Six plays later, McCall picked up his first career touchdown pass, as he connected with Brewer out of the backfield for a two-yard score to put the Chants on top 14-0 with 2:29 to go in the opening quarter.

Following a punt by the Jayhawks, the Chants’ offensive barrage continued as a 43-yard pass and catch from McCall to Likely from two-yards out capped a seven-play, 89-yard scoring drive to put the Chants on top 21-0 with 10:57 left to go in the first half.

The defense for the Chants forced a KU 53-yard field goal attempt, which was five yards short, and then recorded its third takeaway of the opening half on an interception by Gunter to set up the CCU offense one more time in Kansas territory with 2:10 to play before the halftime intermission.

Coastal refused to take its foot off the gas pedal, as four plays later McCall found a streaking Heiligh down the middle of the field for a 25-yard catch as the Chants took a four-score lead of 28-0 with 49 seconds remaining in the opening half.

Kansas was able to move the ball down the field over the closing seconds of the first half, setting up a 47-yard field goal that hit the crossbar and fell through to cut the Coastal lead to 28-3 at the halftime break.

After being forced to punt the ball following two first downs to start the second half, the Jayhawks found some rhythm in their offense and put together a strong 15-play, 89-yard scoring drive, highlighted by a 14-yard touchdown pass and catch from Kendrick to Andrew Parchment to cut into the CCU lead.

The Jayhawks made good on the two-point conversion attempt to put the score at 28-11 with 2:29 left in the third quarter of play.

A CCU three-and-out kept the momentum in favor of the home team, as the Jayhawks used a 61-yard touchdown run from Velton Gardner to close the gap to 11 points at 28-17 after the failed two-point attempt.

Coastal opened up the fourth quarter with a nine-play, 81-yard drive, that had three first downs, a pair of 20-plus yard receptions from Likely, and a two-yard touchdown dive by McCall to double-up the Jayhawks at 35-17.

Kansas would score on its ensuing drive to put the score at 35-23 following a failed two-point conversion, only to see the Chants’ defense come up with a stop on four plays the next KU offensive possession to help seal the win before a Massimo Biscardi 27-yard field goal.