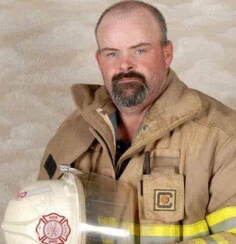 According to Mayor Dwight Osborn, the city, the fire department and the community will “miss him greatly.”

“He loved this community and loved to help people,” Osborn said.

The 44-year old Honeycutt had been with the city’s fire department for close to a decade. He was promoted to chief around a year ago.

He was a longtime member of the volunteer rescue squad and had over 20 years of volunteer service to his community in various capacities.

“Anytime there was someone in need, Wayne was the first one to jump in and do fundraisers and try to help people. He enjoyed serving the community and it showed,” Osborn said.

The mayor also said Honeycutt had “made great progress in improving Jellico’s fire department” over the last year.”

He will be missed by his fellow firefighters, the city and the community,” Osborn said.

La Follette Fire Department Chief Jimmy Pack met Honeycutt in the fire service and had known him for years. “Wayne was a great guy; he was always out to help people and would do anything he could do for somebody,” Pack said.

A photo memorial to Honeycutt has been shared on Facebook on the Jellico Mayor’s Office page. A special flag presentation will be held once funeral arrangements are finalized.

The La Follette ladder truck and the Williamsburg ladder truck will hoist American Flags over the road for the funeral processional.

Mayor Osborn said he plans to do a proclamation to honor Honeycutt the day of the funeral as well. (WLAF NEWS PUBLISHED – 01/04/2021-1:30PM-UPDATED)