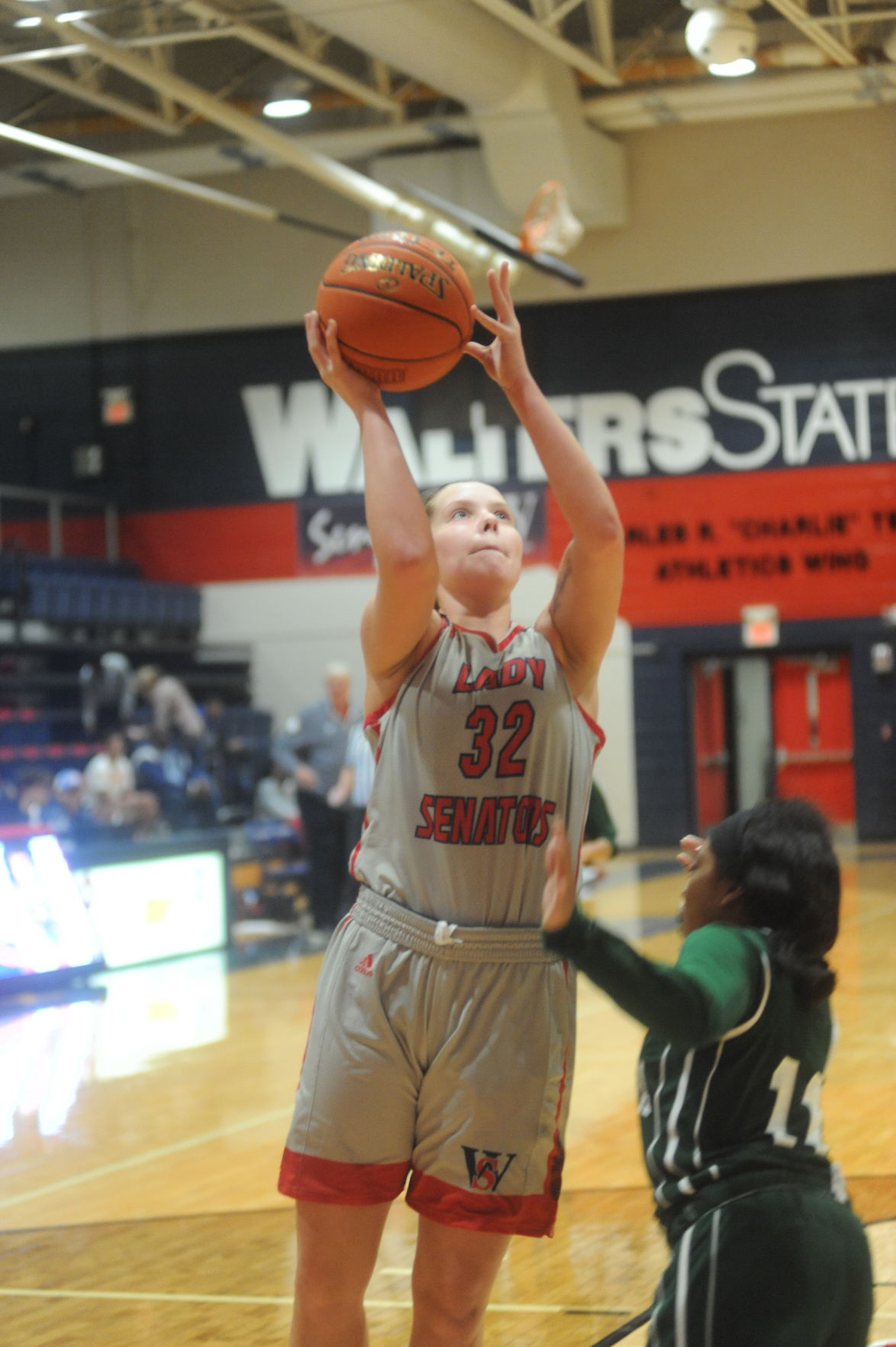 MORRISTOWN, TN (SPECIAL TO WLAF) – There’s just something about second halves against Roane State. This time, it was former Campbell Lady Cougar Haley Comer knocking down a three triggering a 13-2 run that broke the game open in the third quarter.

Just days after using a big second half run to take down the Lady Raiders, the Walters State women’s basketball team did the same thing once again on Tuesday night in the quarterfinals of the TCCAA conference tournament.

TOP PHOTO: The former Lady Cougar, Haley Comer, powers for points in a game from earlier this season,

Comer, only playing 20-minutes in the rout, finished with seven points, two steals, one assist and one rebound.

They will now host Chattanooga State in the semifinals of the TCCAA tournament on Thursday evening at 6 p.m.

“I told them that the biggest thing about this was that it was win or go home,” Walters State coach Jasmin Coleman said. “We just really turned up our defense (in the second half). In tournament time, you have to play good defense. And we did that.”

It was a total team effort for the Lady Senators as nine players scored. As a team, Walters State shot 46.6% from the field and had 15 assists.

While it was a team effort, one Lady Senator shined bright in the fourth quarter.

Vertonia Bady, after playing limited minutes in the first three quarters, played the entirety of the fourth quarter, showing what she is made of as she scored 23 points in the final 10 minutes. She was the leading scorer.

“She did what a sophomore is supposed to do. She stepped up,” Coleman said. “She got things done. She has experience from last year in the tournament and how hard you have to play. She made spots and went out there and picked her team up.

Along with Bady, Blayre Shultz had 16 points while Jaida Wiggins had 10 points, six assists and six steals. Quentara Mitchell had 12 points while Kiera Hill had 10 and Madison Mccoy contributed eight off the bench.

It was a back-and-forth affair for the Lady Senators and Lady Raiders in the opening quarter. Walters State took the lead early on buckets from Hill and Wiggins and then a Shultz 3-pointer made it 11-6. The Lady Senators would up the lead to 15-6 on a Mitchell layup and two Mccoy free throws and led 15-10 after one.

Any chance of a Roane State comeback quickly went out the door in the third quarter. Midway through the period, Walters State went on a 13-2 run, pushing their lead to 47-26 when Haley Comer knocked down a 3-pointer. The lead was 26 at the end of the quarter when Shultz hit a 3-pointer at the buzzer.

With the game in hand, the Lady Senators took it to Roane in the fourth quarter. After Shultz hit a 3-pointer to make it 68-34, Bady took over and scored 19 of the final 23 points for Walters State. Bady hit five 3-pointers in the quarter and was 7-11 from the field and a perfect 4-4 at the free throw line. The Lady Senators would end up cruising to the 48-point win.