The WLAF – Hammrtech Hot Line
Bus 20 IS making its rounds on Thursday afternoon ... There will not be any General Sessions Court on Thursday, October 21 ... 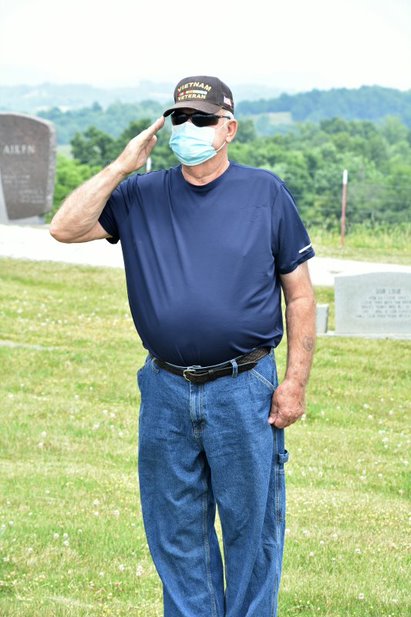 JACKSBORO, TN (WLAF) – World War II Veteran Wheeler Lynn Nelson, 97, passed away on May 21. He was one of the oldest veterans in Campbell County.  View Charlie Hutson’s photo gallery HERE.

He left behind a legacy of love, kindness and service throughout his lifetime, according to his daughter Kathy Murphy, who said her dad “always had his bible and a smile.”

Many may remember him from his days working at the Campbell County Sanitation and convenience center, which he worked at for years after retiring from Chrysler. It was there that he could be found from about 1985 up until 2009, always sitting there with his bible on his lap.

“He witnessed to a lot of people out there; he always had a smile for everyone,” Murphy said of her father.

Nelson was born and raised in Campbell County. He married Delphia Lawson when he was 18 and very shortly afterwards found himself drafted to serve in the Army for the war effort. Nelson spent his time during the military stationed on Staten Island in New York. His rank was Private First Class, and he was an MP in charge of guarding German prisoners.

Murphy said that her dad didn’t tell many stories of his time during the War, but there was one memory in particular that he shared with her.

“He told me a story about one time at Christmas he had taken a group of the German prisoners to a diner for Christmas dinner. When they all got back to the base, one of the prisoners was missing. My dad went back to the diner and there he was, just sitting there waiting on my dad. When my dad asked him why didn’t you run, the young German prisoner said ‘why would I run? You have treated me so kindly.'”

According to friends and family, that experience sums Nelson’s whole life up; “he treated everyone with kindness.”

After returning home to Campbell County from the military, Nelson operated two different lumber mills, one was in Tellico and the other one was out toward Demory. In 1965, he moved to Michigan to work for Chrysler. In 1985, he retired and moved back to Campbell County. He worked at the county sanitation and convenience center until he was up in his 80s. He attended Little Cove Creek Baptist Church.

“He read his Bible and would go to church. He loved to stay working. He was always active and loved being outdoors,” his daughter Kathy recalled.

She said the “greatest lesson” her dad ever taught her was that “you keep your own back yard clean and you don’t have time to mess in anyone else’s.”

“He never touched a drop of alcohol in his entire life. He attributed his long life to hard work and serving the Lord,” Murphy said.

She remembered another example of her father’s kindness occured while they were at a hospital visiting someone.

“As we came out into the waiting room he saw someone sitting in front of the doorway crying and he asked if he could pray for her and she said yes. Afterwards, they spoke for a little while and dad learned she was an author of a book and she wanted to put his name on it for how kind he had been to her,” Murphy recalled. But Nelson said that he preferred for “God to have the credit.” The author sent him a copy of the book once it was finished, with the dedication in the front reading: “To the kind man in a time of need with the kindest blue eyes I’ve ever seen.”

“That’s how he’s always been remembered; by his kindness. He was a very kind and gentle man. When Dad would say ‘I love you’, it was not just words, it was the truth of his heart,” Murphy said.

Nelson also left behind a literal legacy of service, with three sons serving in the Army. His sons served in Vietnam, Desert Storm and in Germany. Two of his grandsons served in the Army, as well as two great-grandsons. One grandson and one great-grandson are still serving. (WLAF NEWS PUBLISHED 05/31/2021-6AM-PHOTOS COURTESY OF WLAF’S CHARLIE HUTSON)