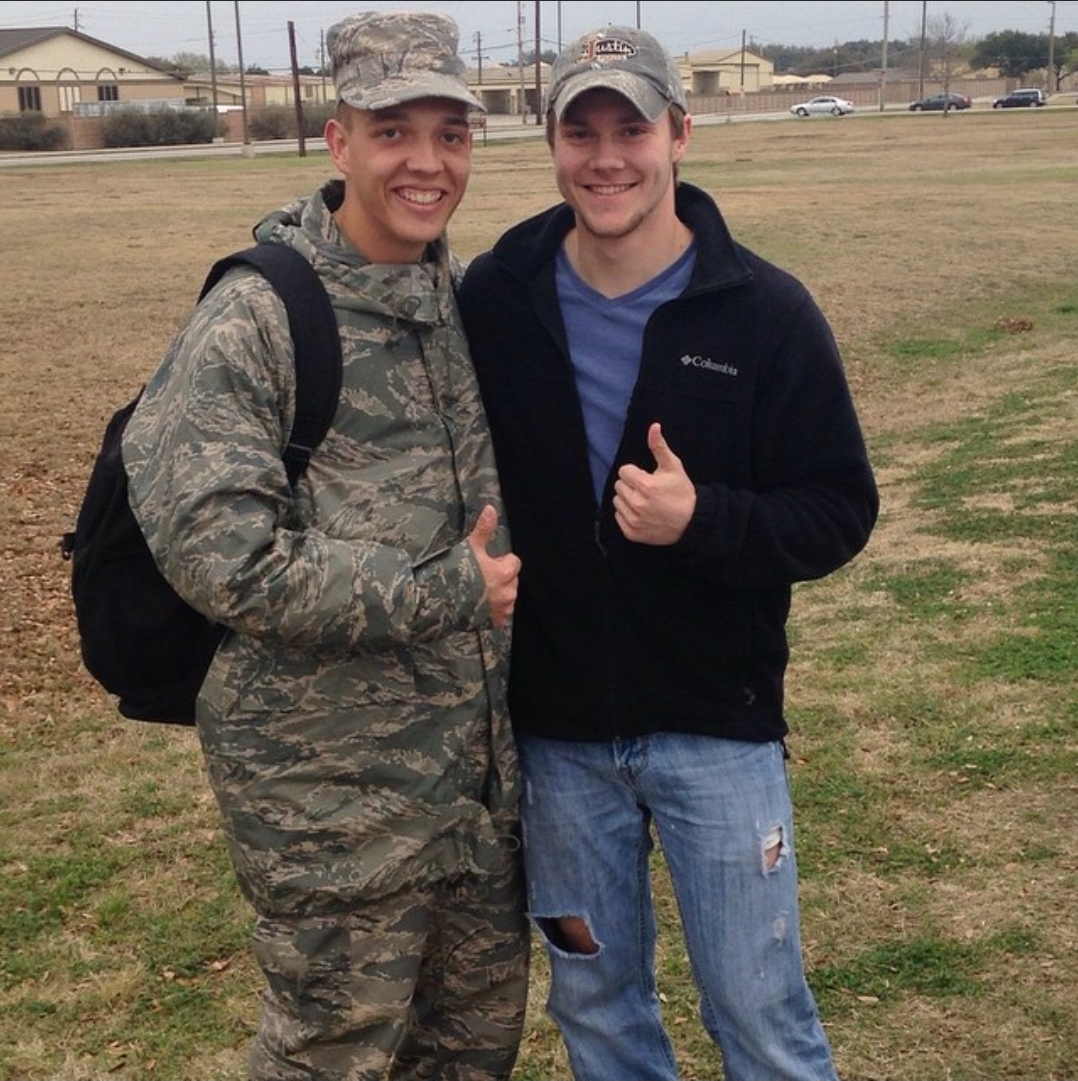 TOP PHOTO: This photo is most indicative of best friends, T.J. Nelson (left) and Dylan Braden. Braden showed up in San Antonio to surprise Nelson when he graduated from basic military training in the Air Force.

JACKSBORO, TN (WLAF) – “We go back to kindergarten and really started hanging out together in fourth grade, and by middle school, we were together, together,” said T.J. Nelson about his best friend Dylan Braden. First at Caryville Elementary and then Jacksboro Middle, T.J. and Dylan were best friends and by high school at Campbell County, that bond had only strengthened.

Tragically, Dylan lost his life late Sunday night in a freak car accident on I-75 a couple of miles north of Knoxville. It was a friendship that ended long before its time. “It’s still hard to believe. It was so sudden. There was no time in this somewhat surreal moment,” added Nelson.

It was Monday at 4:45am when Braden’s bride of six months, Abby, called T.J. “I thought it was just a routine call; maybe her car needed a jump start or something, and then she told me what happened,” said T.J. He had just been best man in Dylan and Abby’s wedding in February.

The pair was a part of the Crazy Cougars student cheering section at Campbell County ball games. Dylan was always right there with T.J., known as being the perennial Mr. Spirit. Once the decision came down to whether Dylan was going to spend his only $10 on gas for the car or for body paint for that night’s event. “He said just come and get me, I’m buying body paint,” laughed Nelson. The pair would also spend time watching video of other schools cheer sections to learn new chants and such.

The best friends ended up on the Cougar Tennis team, and it wasn’t because either of them played tennis. It was because there was a girl Dylan was interested in, and she was on the tennis team. However, Dylan did end up being a pretty good player for the Cougars.

“He ended up being a gym rat. In fact, it was at a gym where he met his future wife, Abby,” said Nelson. Braden had memberships to like a dozen gyms and trained others in addition to his job at the postal service at Knoxville. T.J. bragged on how Dylan had gone from 5″8 and 130 pounds to 170 pounds and then at 215 pounds of just raw muscle. Braden excelled at power lifting.

Nelson called Braden’s vibe as happy in that he lifted a room when he walked in and was always easy going. “He was just top shelf. An Air Force buddy even sent a text expressing his condolences, and he never met Dylan but knew him through my stories,” added T.J.

It’s now up to T.J. to keep his best friendship going with Dylan through the memories and the stories that the pair generated in their 26 short years of life together. Oh, how great it would be for these best friends to get stuck in the mountains on dirt bikes or fire up that Cougar student section just one more time. (WLAF NEWS PUBLISHED – 08/19/2021-6AM)