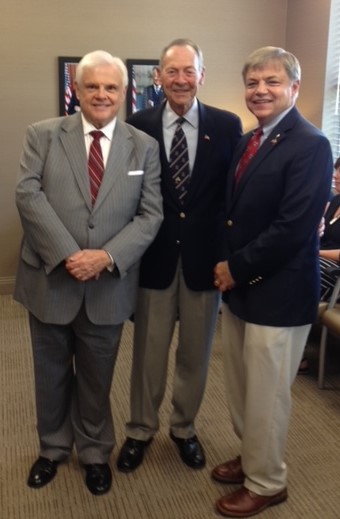 TOP PHOTO: Senator Ken Yager, General Carl Stiner and Representative Dennis Powers at the dedication of the VA Clinic at Community of Health of East Tennessee.

NASHVILLE, TN  (WLAF) – State Senator Ken Yager (R-Kingston) made the following statement on the passing of General Carl Stiner: “General Carl Stiner was one of the most beloved and respected citizens of Campbell County because he never forgot where he came from, despite his national prominence as a General in the United States Army and an advisor to presidents. His roots ran deep in Campbell County.

I had the privilege to know and work with General Stiner for the last 14 years, and I will always value that time. I am particularly grateful for his leadership to secure the primary care medical clinic for veterans in LaFollette. My heart goes out to his wife sue and to their family.” (WLAF NEWS PUBLISHED – 06/03/2022-4PM)