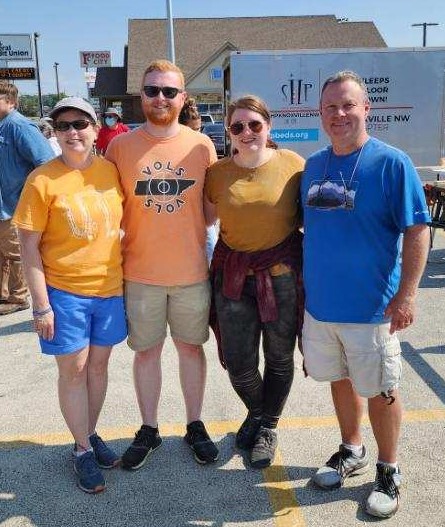 TOP PHOTO: Kenneth “Smiley” Miller’s family remembered and honored him at Saturday’s Bed Build. “Daddy was so passionate about a portion of his estate going to help children in Campbell County,” said Miller’s daughter Linda Prim. Left to right are Linda and Andrew Prim, Andrew’s fiance’ Megan and Jason Prim.

LAFOLLETTE, TN (WLAF) – More than 50 volunteers helped out at the Sleep in Heavenly Peace bed building event held on Saturday in the Food City parking lot.  This year’s event went great, with “perfect weather” and a “great crew,” according to SHP Campbell County chapter leader Bill Thompson. In all, 44 beds were built in about two hours. All the beds will be distributed in Campbell County from the build held in memory and in honor of Kenneth “Smiley” Miller.

Sleep in Heavenly Peace is a nation wide non-profit organization that helps get kids off the floor and into beds. The Campbell County chapter celebrated four years of bed building last week. Saturday’s 44 beds built makes a total of around 900 beds built over the past four years. More than 120 of those beds have been distributed in Campbell County.

Miller was the All-American boy who was born and raised in La Follette, led the La Follette High Owls to the state basketball title game in 1954 and was named All-State. He later became a teacher and coach eventually becoming superintendent of schools.

On Saturday, a total of 54 volunteers came out to lend a hand in helping Campbell County kids get a good night’s sleep.  “Daddy was so passionate about a portion of his estate going to help children in Campbell County. I promised him we would make sure his wishes were carried out,” said Miller’s daughter Linda Prim.

“The support of the county on Saturday and for the past four years has been fantastic,” Thompson.

Bed requests are open and anyone needing a bed for their child can contact SHP.  The local chapter covers Campbell County, Anderson County and Knox County.

Donations made locally are used locally, according to Thompson. Donations of bedding items such as new twin sized sheet sets, pillows and comforters/quilts are always needed. These can be dropped off at ORNL Federal Credit Union, at United Cumberland Bank and at First Baptist Church in Jacksboro.

Thompson said he wanted to say thanks to all the volunteers and everyone who participated.

Saturday’s build was dedicated to Kenneth “Smiley” Miller in honor of his “love for children,” according to Thompson, who said he was sure Miller was “smiling down” on them at Saturday’s event.  “On Saturday, I’m sure he was smiling down from Heaven to know so many children will receive a bed,” added Prim.

The next SHP Bed Build will be in Knoxville on October 1. According to Thompson, there may be another Build after that in Jacksboro, depending upon funding.

For more information, or to sign up for a bed, visit shpbeds.org or check them out on Facebook.