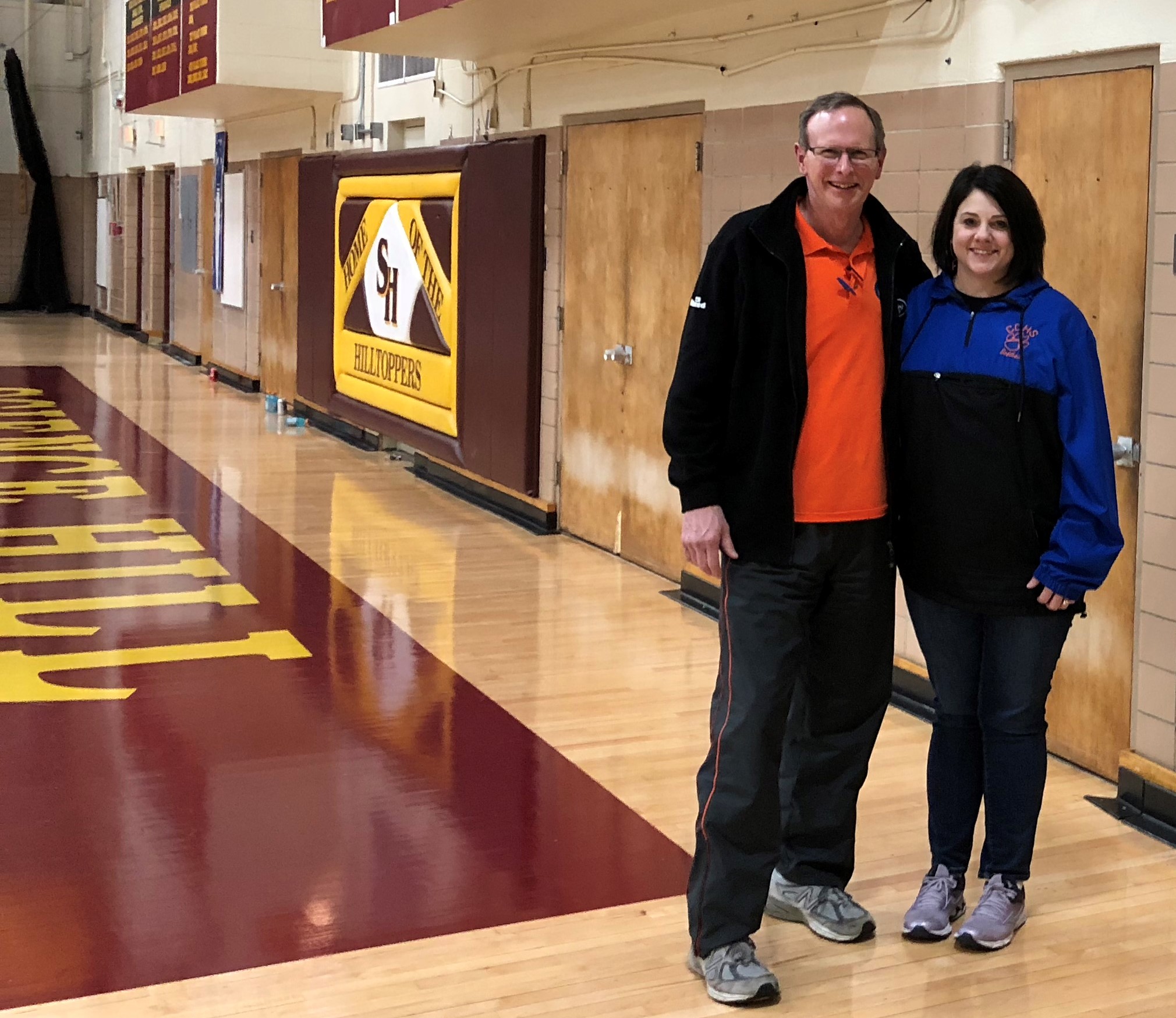 It was a fun trip down Lady Cougar Memory Lane Saturday at the old Science Hill High School Gym.  Jim Freeman (left) and Jill Browning (right) shared memories of when Campbell made CCHS basketball history on the Hill Toppers’ once home court nearly 29 years ago.

JOHNSON CITY, TN (WLAF) – The old gym on top of the hill the town calls Science Hill remains.  Though it’s been relegated to youth league games and a place for the Science Hill basketball teams to practice at 3:30 pm rather than 5:30 pm.

However, for former Campbell Lady Cougars like Jill Cox-Browning and an old play-by-play announcer like me, the old gym is hallowed grounds.  In the late winter of 1991, the Lady Cougars made Campbell County High Basketball History on the Science Hill hardwood.  That team won the school’s first and only sub-state basketball game there on its way to the school’s only state tournament.  Yes, it came on the road, against a favored Lady Hill Topper team and in front of a very partial home crowd.  Sherry Bostic-Chapman, CCHS’s only Parade All-American, led the Orange-n-Blue to this pinnacle in her very first season as head coach.

Like that Saturday long ago, this past Saturday, Campbell County ventured back to the same hill but to a nearly brand new Science Hill Gym fittingly dubbed the “Topper Palace.”  The scene was a lot different this time.  An aged-faced, weaker voiced announcer broadcast the game as a now darker haired, not the once blonde, wife and mother of two sat in the stands as it was now her daughter, Cora, who played for the Lady Cougars against a favored Topper Team.  Not as much was at stake here on this Saturday except for the hopes a hobbled Lady Cougar team could make a good showing and maybe even repeat upset history.  It nearly did.  It fell in the closing moments 64 to 58 despite a 20-point fourth quarter, missing injured inside force Madison Brady and losing star Emily Ellison for a quarter from an elbow blow to the face.

Earlier this week, as I did some homework for the CCHS-SHHS broadcast, I sadly discovered the Toppers had a new gym.  My thoughts of getting to call what I knew would surely be my last-ever broadcast from Science Hill sank.  The old gym was gone.  But to my elation, upon arrival, I found the old gym was alive and well with two youth league basketball teams playing up a storm.  It was still there.  There where Jill and the girls made history and where I sat high above the court and broadcast the CCHS milestone win on WLAF.  What a wonderful memory I now have to add to those 29-year old memories that sprung to life one last time on top of Science Hill. (WLAF NEWS PUBLISHED – 02/03/2020-6AM)

One Reply to “Revisiting where Lady Cougar history was made”