Eighty-five years ago, Smith Hardware opened in downtown La Follette.  Paul “Cooster” Smith thinks the store may even be older than that.  Smith was eight years old when his grandfather, W.T. Smith,  opened the store. 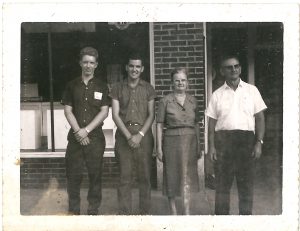 On Saturday, current owners Debra Miller and Sherman Campbell along with Cooster, welcome you by for a fun day of celebration and savings at Smith ACE Hardware between stop lights 7 and 8.  CLICK HERE for some old Smith Hardware photos.

The store’s ownership has been sorta like a family daisy chain.  Cooster says when his father, P.W. “Cotton” Smith bought the store from his father, W.T., the business was about to go under.  Cotton revived it.  Cooster came back from military service in 1946 and went right to work at the store and stayed there until 2001.  It was 1965 when Cotton gave Cooster the store. 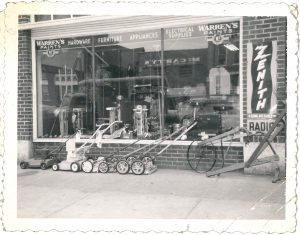 The daisy chain was broken when Smith sold the store to an out of town buyer.  That lasted for about ten years until the group decided it didn’t want the store any longer.  Miller and Campbell were running the store and were naturals to buy it.  And they did.  That, to a great degree, brought the store back into the family fold.  Because Debra and Sherman have been like family to Smith.  And vice-versa.

It was 1981, while Deb was in college, when she started at Smith’s.  She moved away, for a short time, and then returned right back to the store.

Sherman hired on in high school in 1993 and has been there ever since.  Cooster chuckles when he says Sherman was so shy as a youngster, he could barely say “hi” to a customer.

Deb lost her father when she was two-years old calling Cooster like a dad to her.  Her daughters have even worked for the store and her sons spend time helping some after school. 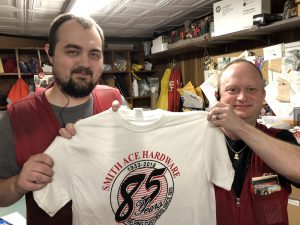 Miller is the bookkeeper and is pleased how the store is coming back saying customer numbers are up.  The out of town owners talked of closing the store before she and Sherman bought it.

Campbell was accepted into the Roane State Nursing Program out of high school.  But he decided to stay on at Smith’s.

Saturday brings store wide deals and a hot dog lunch for customers.  The drawing will also be held for the customized ACE Orca cooler to be given away tomorrow. 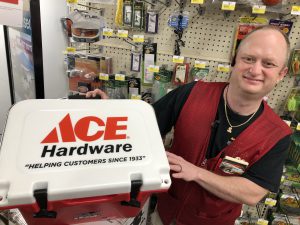 There’s a 20% off sale on Saturday on many items.  Trimmers, Case Knives, and grills are all 10% off.