Senator Ken Yager visited with members and guests of the South Campbell County Rotary Club at the club’s weekly lunch-meeting in La Follette.  After lunch, he traveled up Highway 25W north to Jellico to meet with Jellico Mayor Forster Baird. 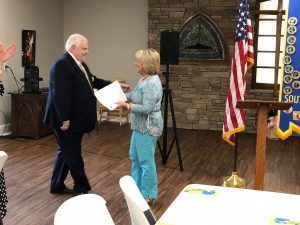 Tuesday’s talk at Rotary focused on some of the state’s accomplishments and challenges with kind comments about Campbell County sprinkled throughout.  The need for broadband, more jobs, and drug abuse were touched on by Yager saying broadband is the number one topic everywhere he goes.  The senator calls it a very serious issue in that having high speed internet is no longer a luxury.  It’s a must in business.  He mentioned that electric coops are charged with helping bring broadband to rural parts of Tennessee.

Yager told the audience that he wants to make sure he can get all he can for Campbell County.  And his other counties.  You don’t have to look too far to find evidence like the new general purpose lab at Roane State College in La Follette or the new windows currently being installed at the old La Follette Post Office. 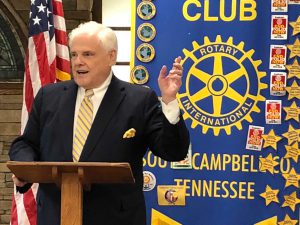 And speaking of the old La Follette P-O.  Yager describes it as a World War II – Cold War post office and calls Postmark La Follette a national treasure for its efforts to keep it going.  He applauded this special group of people willing to do the work to revive the old building.  He says, “Local means everything to me.”

When Yager returned from Jellico Tuesday afternoon, he made a special stop by the P-O.  He wanted to see the new windows.  (WLAF NEWS PUBLISHED – 08/01/2018-6AM)