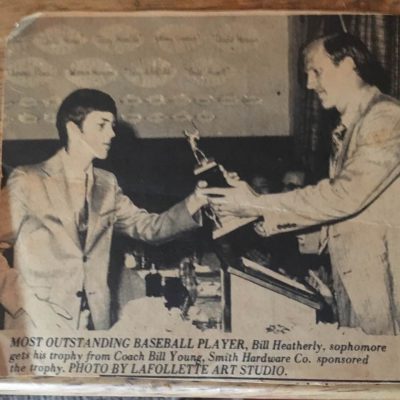 Bill Heatherly sat the bench for the La Follette Owl Baseball team in 1972.  But not for long.  It’s sort of understandable why LHS Baseball Coach Bill Young didn’t have Heatherly in the starting line-up and not playing much at all.  After all, Heatherly was just a sophomore and the smallest player on the junior-senior laden team.

However, it was during a blow out loss when Young inserted Billy into action.  Young told the story at the all sports banquet of how he wasn’t much of a coach for keeping Heatherly out of the line-up and not recognizing his ability.  That came after Heatherly shined in what little playing time he was allowed in that wide-margin game.

In the loss, Bill had a ball hit to him in deep center field.  He fielded the ball and threw it on a rope to the catcher at home plate.  Needless to say, that play caught Young’s eye.  Heatherly was not only good in the field, Young learned, but adept at the plate and speedy on the base path.

Bill Heatherly was fittingly named the Smith Hardware “Most Outstanding Baseball Player” for the 1972 season.  The picture above is of Heatherly receiving the trophy from Coach Young.