“I’ve watched three boys turn into men before my eyes,” said Matthias.  He talked of watching a three-year old video and being amazed at the “then and now” looks and actions of these youngsters. 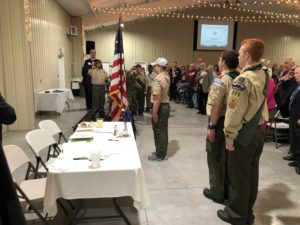 Eagle Scout Logan Hickman, with Peoples Bank of the South and founder of the Campbell County Good Scout Award Dinner, told the capacity crowd that this year’s fundraising goal is $56,500.  Nearly $36,000 of that goal has been reached he added.  Goal deadline line is May 31.  Hickman said, “Of that goal, 80% goes to local scouts.