A stamp was six cents. Gas was 35 cents a gallon. And Stinking Creek Road had just been paved. Fast forward 50 years, Stinking Creek Road is being paved again.One county official thinks it’s been 50 years or more since that stretch of road was paved. Some people living  along the road think it was 35, maybe 37 years ago. Whatever your math, it’s been a long, long time.

Campbell County Road Superintendent Ron Dilbeck calls the paving a “good deal.” Dilbeck said he is glad to see the residents who live along and travel SC Road regularly getting a new road. 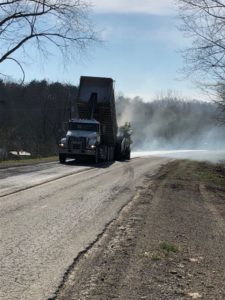 Crews with the Rogers Group began pulling some leveling material, the base, last week. Dilbeck points out that they were filling in the low spots with a base of hot mix.

First thing yesterday morning, crews began the overlay, or finished coat of asphalt. They started on the I-75 end of the road and were able to lane down about three-miles of one-lane.

“TDOT is overseeing the project. They plan to stay after it and want to finish as soon as possible,” Dilbeck said.

“I’ll work on it.”  That’s what Senator Ken Yager told Dilbeck more than two years ago.  And work on it Yager did. 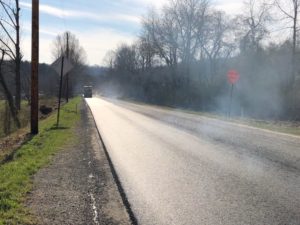 Dilbeck said, “The senator went way beyond to help, and he listened to me the first time I called which was more than two and a half years ago.”  The first-term road super adds “he never gave up.”

“Our community is beyond excited.  Christmas is coming early this year,” Ayers said.