A young woman is dead and a pair of La Follette Police Officers is on administrative leave this afternoon. It was a predawn encounter between the woman and the officers responding to the call of the woman attempting to break into a home on East Prospect St. that precipitated the shooting.

TOP PHOTO:  On the left is LPD Captain Stephen Wallen with three investigators from the Tennessee Bureau of Investigation 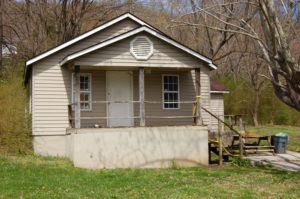 It is believed that this is where the woman attempted to get in.  This home is on the next block over from where the confrontation took place.

The La Follette Police Department said in a release the LPD Dispatch received a call regarding a female attempting to break into a home on East Prospect St. in La Follette. When officers arrived they encountered a female. She pulled what was believed to be a handgun from her waistband of her pants. After several requests by officers to drop the gun, the woman allegedly pointed the gun at officers forcing them to fire striking the suspect. 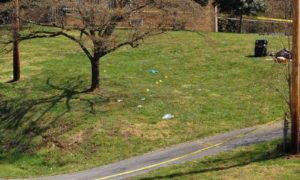 Evidence markers on this grassy bank across the street from East La Follette Baptist Church likely indicate where the encounter took place.

“It is unfortunate, and I hate it all the way around,” LPD Chief of Police Bill Roehl said. It is standard procedure for the officers to be placed on administrative leave, the chief said. “We have a group of compassionate people on our force, and this is really bothering the two officers involved, because it is something they will have to live with” Roehl said.  The name of the woman involved has not been released yet. (WLAF NEWS PUBLISHED – 04/01/2019-2PM)

One Reply to “Morning shooting leaves one woman dead; two officers on leave”