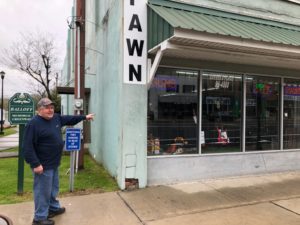 Ray Caldwell points where Woodson’s Cash Stores, that opened in 1919, was located.

“They’d get upset with Pop and go right next door and shop at The Circus Grocery,” said Ray Caldwell.  Ray laughs and adds “they had no idea he owned that grocery store, too.”

TOP PAINTING:  The way it looked back in the day on East Central Avenue at First Street. 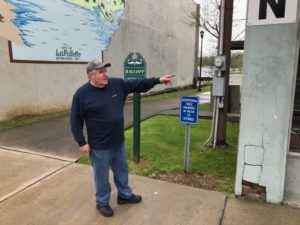 As Caldwell points to where Woodson’s was, he stands in front of the breezeway where the Circus Grocery once stood.

Robert L. “Pop” Woodson, Sr. owned Woodson’s Cash Store and Circus Grocery in the heart of downtown La Follette.  He ran Woodson’s while Taylor Claiborne was in charge of the Circus.

Rob Woodson recalls that his grandfather would eat lunch on the back dock of his grocery store.  His competitor, Marion Shelby of Shelby’s Grocery, would always eat lunch with him.

Woodson’s celebrates its 100th year in business in 2019.   Woodson encourages anyone who ever worked at Woodson’s or anyone with a late friend or family member that worked at Woodson’s to call his office and have their names added to the big list.  Woodson plans to feature that list at the 100-year celebration.