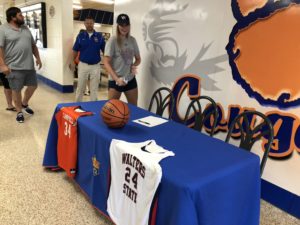 Haley Comer walks over to sign her scholarship papers

“You need to come with us.  We need you.”  That’s a portion of the pitch Walters State Lady Senators Head Women’s Basketball Coach Dave Kragel made to Campbell County Lady Cougar Haley Comer.  Haley’s mom, Debbie, said the coach started recruiting Haley in December and even made an in-home visit.  TOP PHOTO:  Dad Brian, Haley and Mom Debbie Comer

Wednesday afternoon in the Commons at CCHS, Comer was surrounded by family, friends and her teammates as she signed scholarship papers to play for the Morristown college the next two years.

CCHS Principal Jamie Wheeler calls Comer “one of her favorites and a great student.”  Wheeler added a footnote; I expect to see you playing for a Division I school in a couple of years.

Comer has her sights set on improving during her time at Morristown.  She enters her freshman season at six-feet, 170 pounds.

“It’s hard to believe it’s been four years.  She’s worked her tail off, and it’s paid off,” said Lady Cougar Head Coach Brad Honeycutt.  He went on to say that “she’s making a good choice.”  ‘Cutt was thrilled and so were all of Haley’s teammates. 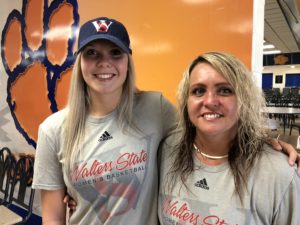 “She has a lot of courage.  She’s very versatile.  And she’s relentless,” said Haley’s Number 1 fan, her mother Debbie (above with Haley).  Mom and dad, Brian, both played sports at CCHS.

Walters State Women’s Basketball is a national powerhouse as Kragel enters his 43rd season as head coach.  The Lady Senators have been to eight straight national tournaments including two Elite Eights and one Final Four during that  span.

“I’ll be working out all summer.  My workout packet and schedule arrived the other day, and I’ll be following Walters State’s guidelines to the T,” said Comer. 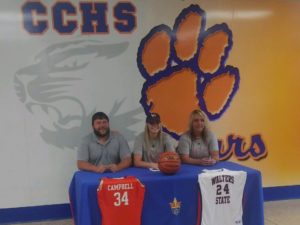