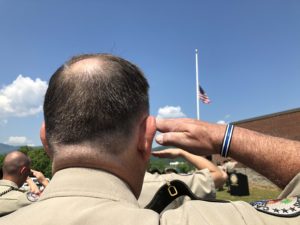 Jacksboro, TN  (WLAF) – “End of Watch” are chilling words to hear.  The term indicates the date that a law enforcement officer has died and finished his service.

Saturday, on the grounds of the Campbell County Sheriff’s Office, officers, family and friends gathered around the flag pole to remember those, primarily local, who lost their lives in the line of duty.

PHOTO AT THE VERY TOP:  The hug between Sheriff Robbie Goins and fallen officer Mike Starrett’s widow Jerri summed up the ceremony.  The sheriff presented her with flowers.

Chief Deputy Jeremy Goins served as master of ceremonies under the warm mid-day sun.  Sheriff Robbie Goins was the keynote speaker saying “It’s our way to show respect.  It’s about those we know and don’t know.”  Fifteen Campbell County law officers have died in the line of duty. 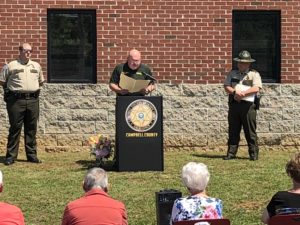 Members of the Starrett family were on hand, including Jerri, the widow of Jacksboro Police Sergeant and Detective Mike Starrett.  Starrett died in the line of duty in the winter of 2015.  He was on his way to assist a family involved in a fatal car accident when he himself was involved in a tragic car crash.  Starrett later died from injuries he sustained in that wreck.

The list of the names of fallen Campbell County law enforcement officers was read by Chief Goins.  He became emotional when he came to the last name on the list, Starrett’s.  It took him a while to finish. 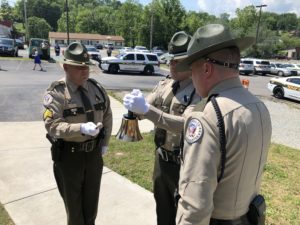 CCSD Sergeant Mike Owens (L) struck the bell 43 times remembering the 43 officers who have died on duty in 2019.

Starrett was a good friend of Sheriff Goins.  The two road motorcycles in their spare time.  The sheriff said, “You don’t go long without a thought of him every day.”

CCSD Chaplain Kenny Allen closed with prayer.  He prayed “Lord, I ask you to remember these men and women who serve and protect us every day.  When they put on that badge, they never know if they’ll come home.  Please remember these families here and the other families who have lost loved ones.” (WLAF NEWS PUBLISHED – 5/20/2019-6AM)