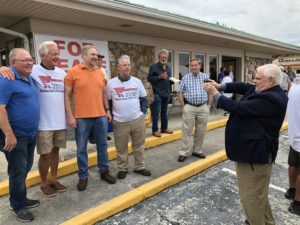 LAFOLLETTE, TN  (WLAF) – Gray skies and rain didn’t hamper the enthusiasm at the Woodson’s 100 year Celebration on Saturday. As the business who has employed so many in the community celebrated its centennial, employees present and past turned out to honor the local institution.  WLAF’s Charlie Hutson’s photo gallery is HERE.

When opening the event, Rob Woodson, III, acknowledged that while it was his family’s business at the center of the festivities it was only through “good people” the business had stood the test of time. “We have been very fortunate to have them,” he said of the many employees.

As The Parrott Brothers provided music for the afternoon, a cavalcade of people offered praise for the locally owned business. 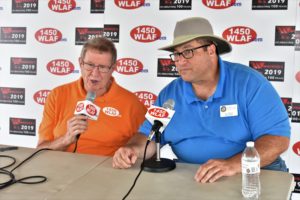 “He (Woodson) has an innovative business mind,” said Campbell County Mayor EL Morton. “He continues to put people in these retail spaces.” Speaking to when Woodson’s New World of Shopping opened in the early 1980s, Morton said at the time it was the most technically advanced grocery store in the state. The store introduced scanners, which are common place today, at the registers.

The Mall’s, as it came to be known, unique design with the covered portico out front was also new for the area. When shoppers learned they could pull their car to the front and have their groceries loaded, the store drew more customers. 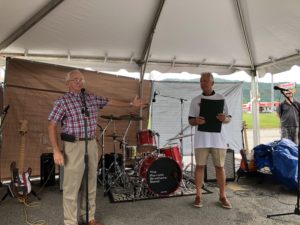 Former bag boy and now LaFollette Utilities Board General Manager Kenny Baird, started his career at Woodson’s. From 1981 until 1987 he worked at the store. It provided a foundation for the career he has today, he said.

Watch the celebration in its entirety HERE.

Recognized as Woodson’s Oldest Living Employee, Margaret Davis, now 86 -years- old, recalled starting at the store when she was 15- years- old. She spent her career at the store. It was a great place to work, she said. 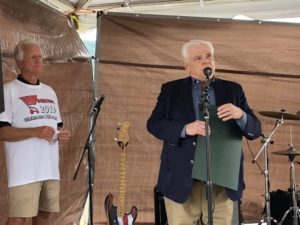 As prizes were give away throughout the day, Betty Chapman walked away with the grand prize, a weekend stay in the Smokies. She, too, is a former store employee.

“This has been a fantastic day,” Woodson said. “We have enjoyed reconnecting with everyone. We are fortunate to be in Campbell County.” (WLAF NEWS PUBLISHED – 06/10/2019-6AM-PHOTOS COURTESY OF WLAF’S CHARLIE HUTSON)