Wlaf1450
News / Sports / October 30, 2020October 30, 2020
JACKSBORO, TN (WLAF) –  A routine sweep of a Campbell County Jail cell resulted in the arrest of a Rocky Top nurse for sharing letters and photos of a sexual nature and having inappropriate contact with an inmate. 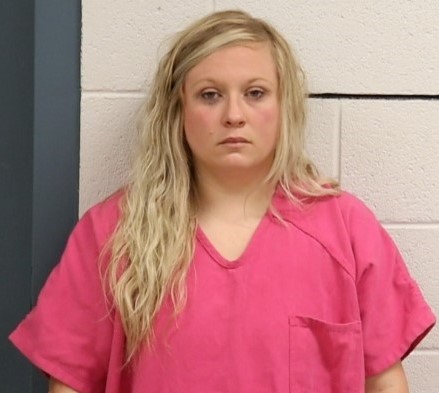 Nurse Alyssa Armstrong is a contracted employee that works for the jail’s healthcare company.
According to a Campbell County Sheriff’s Department press release, nurse Alyssa Armstrong was arrested on Oct. 28 after an investigation was concluded.  The investigation began on Oct. 25 after a routine sweep of the inmate’s jail cell revealed letters and photos addressed to the inmate from Armstrong.
Armstrong is a contracted employee that works for the jail’s healthcare company.
The photos and letters were placed in evidence and Lt. Mallory Campbell and Captain John Long continued the investigation by interviewing the inmate in question.  According to the report, the inmate admitted to engaging in a relationship with Armstrong through the writing of letters and that she had given him the letters and photographs while he was incarcerated in the Campbell County Jail.  Additionally, the inmate also admitted that he had “engaged in inappropriate contact as defined in the statute as sexual contact with an inmate with Armstrong on jail property.”
On Oct. 28, Lt. Campbell and Captain Long located the 26-year old Armstrong at her Rocky Top home to interview her for the investigation.  During the interview, she confirmed she had delivered letters and photographs to this inmate “using her authority as a contracted employee of the jail.”
Following her admission, Armstrong was arrested for sexual contact with an inmate and was booked into the county jail.  She is due in General Sessions Court on Thu., Nov. 5 at 9 a.m. and is currently free on a $7,500 bond.  (WLAF NEWS PUBLISHED – 10/30/2020-3PM)