Since it’s been two-plus years since the passing of three LaFollette Boy Scout “alumni” — Leader Lee White, and Scouts Kim “CJ” Russell, and Jimmy Arnold — a reflection of Scouting for the area makes sense.  All were former members of Boy Scout Troop 435, sponsored by the LaFollette United Methodist Church.  The troop was active for many years: it’s leadership in the 1970s helped develop a number of Eagle Scouts, Boy Scouting’s highest award.  Feb. 8 was National Boy Scouts Day; Feb. is also Boy Scout month.

Many dedicated adult volunteers helped crank out a large number of Scouts who earned their Eagle:

These Eagle Scouts and others in Troop 435 held many camping trips at Camp Sequoyah on Norris Lake near LaFollette; and during the summers went for a week to Camp Pellissippi on Norris Lake near Andersonville.  Other activities for several members of this group of 1970s Scouts included a 12-day hiking trip to Philmont Scout Ranch in 1975. (See photos).  Six LaFollette Scouts: Chuck Taylor, Dan Freeman, William Neal, John Troutman, Kim “CJ” Russell, and Walter “Scooter” Cox hiked 82 miles through the rugged wilderness of 140,177 acres in the Rocky Mountains of northern New Mexico.  For more photos, see Facebook: LaFollette, TN Boy Scout Leaders & Eagle Scouts in 1970s.

LaFollette-area youth and adults interested in participating in Scouting can contact Logan Hickman, Boy Scout’s Great Smoky Mountain Council Commissioner, at 423-562-4921. Logan, who earned his Eagle as a youth, is currently the EVP at Peoples Bank of the South in LaFollette. Coming from a family of Eagle Scouts, Logan pinned the Eagle Scout badge on his sons David and Andy in 2010.

The Boy Scouts of America was founded in 1910, and soon thereafter, Scouting took hold in LaFollette as the B.S.A.’s LaFollette Council was chartered in the city between 1921 and 1923.  That council later merged into the Great Smoky Mountain Council (based in Knoxville). 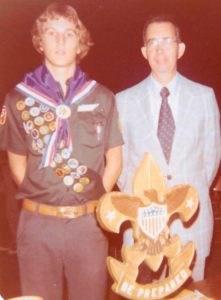 From left: John Troutman at his Eagle Scout Award Ceremony with Scoutmaster Bob Kibler in 1975. 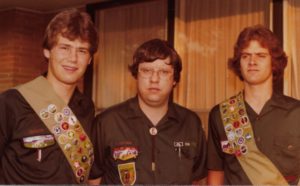 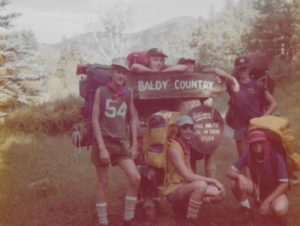