After being open for decades, the local Comcast office at Indian Mound at Jacksboro closed on Feb. 19.  And that’s creating some problems for people who ordinarily pay their cable bill in person. 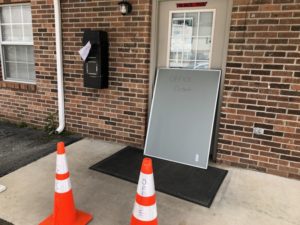 This is what Mary Jones (top photo) found when she showed up Monday to pay her cable bill; a closed office. 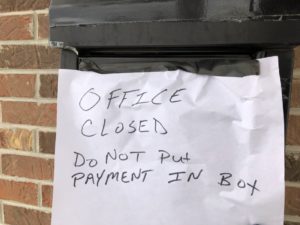 For anyone needing to swap a modem or other piece of equipment or pay a bill in person in Campbell County, that is no longer an option.  A former Comcast employee told WLAF that people now have to drive to the Knoxville or Oak Ridge Comcast office to do that.

Other ways to pay Comcast are online, auto pay, call-in to pay and mail-in.  However, if you prefer paying in person and making that payment here in Jacksboro, you can do that at your local Radio Shack in the Pointe Shopping Center; not far from the now closed Comcast office. 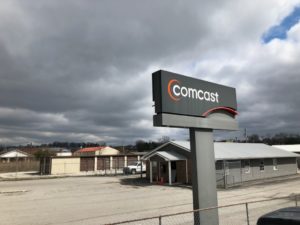 Estimates are that there has been a local cable television office in La Follette or Jacksboro since the 1960s.

WLAF News happened upon Mary Jones of Jacksboro (top photo) who was surprised that the Comcast Office had closed.  She said she had no idea the office was closing until she stopped by on Monday afternoon to pay her bill.  “This is how I pay.  In person.  I don’t pay over the computer,”  Jones said. When she was told she could pay at Radio Shack, she said, “I bet that’ll cost me more money on my bill.”  And she is right. 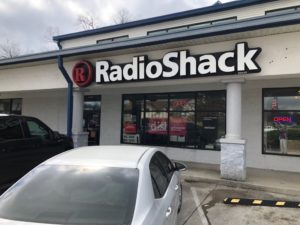 If you pay your Comcast bill at the local Radio Shack, you must pay in cash and are charged a five dollar handling fee.

Radio Shack employee Patrick Wingate explains that the local Radio Shack has always been an option for paying your Comcast bill, but up until now, they were not needed because of the local cable office.  If you pay in person at the Radio Shack, he says that there is a $5 fee on top of the Comcast total.  Wingate emphasizes that the fee and the cable bill must be paid in cash, and that you must have your Comcast invoice with you when you stop by to pay.

3 Replies to “Where can you pay your Comcast bill in person?”