The clean-up, paint up, fix-up week for the City of La Follette was scheduled for the week of April 26.  However, the one-week annual project has turned into two weeks according the City Administrator Jimmy Jeffries.

Jeffries points out that the object has been to do a little more each year.  That little more extended into two weeks this spring.  He said that it takes the better part of three days just to paint the curbs. 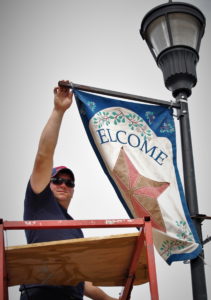 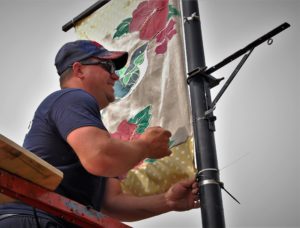 The baskets had to be “re-done” Jeffries said.  Crews hustled Wednesday to hang the baskets ahead of expected rain in the second half of the week.

The city administrator said he spoke with visitors who were in town from Huntsville, Alabama, and Cincinnati, Ohio, on Wednesday.  He added that it reminded Jeffries why it’s important for the city to take time each spring to freshen up for its visitors and citizens.  (WLAF NEWS PUBLISHED – 05/02/2019-6AM-PHOTOS COURTESY OF WLAF’S CHARLIE HUTSON)